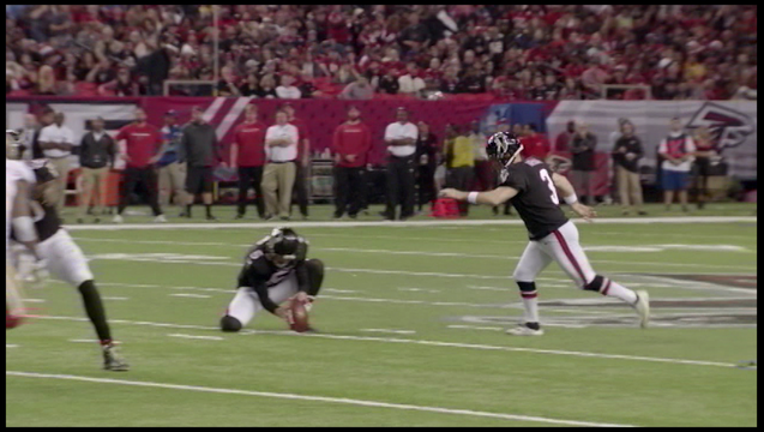 FLOWERY BRANCH, Ga. (AP) - Through his first 15 NFL seasons, this has been the time of year when Matt Bryant would look at the Pro Bowl voting and shake his head in disappointment.

Finally, this was Bryant's year.

Bryant, the Atlanta Falcons' 41-year-old kicker, made his first Pro Bowl team this week. His 24th career field goal of at least 50 yards may have finally convinced voters he deserved the spot.

Bryant's 59-yard field goal to end the first half of the Falcons' 29-28 loss to Kansas City on Dec. 4 left a well-timed late image with voters. It was the second-longest of his career and provided proof he remains one of the NFL's strongest kickers.

"It was perfect timing right before the vote where you make a perfect kick at the end of a half," Falcons special teams coach Keith Armstrong said Wednesday. "Maybe that had something to do with it. Maybe the guys saw that and said 'Hey, maybe I'll vote for him this time. He's been kicking so long, maybe he deserves it.'"

Bryant has made 29 of 31 field goals this season and 48 of 49 extra points. He has been good on each of his eight field-goal attempts from 40 to 49 yards and has made four of six from at least 50 yards.

Those are Pro Bowl-worthy numbers, but he has had similarly strong seasons in his career with the Giants, Colts, Dolphins, Buccaneers and Falcons.

"In the past I've had some great years when it didn't happen and it was like a 'Are you kidding me?' type deal," Bryant said Wednesday. "But when it came to this time I knew I had a good chance and luckily and gratefully I was selected."

Bryant's longest field goal of his career was a 62-yarder for Tampa Bay in 2006.

The Falcons (9-5) play at Carolina on Saturday. Atlanta can win the NFC South by beating the Panthers, accompanied by a Tampa Bay loss or tie against New Orleans.

The irony for Bryant is after all these years of waiting for his Pro Bowl opportunity, his biggest wish is that he doesn't get a chance to actually play in the game.

"Hopefully I can skip it because I go to the Super Bowl," he said.

When Falcons coach Dan Quinn was asked about the voting results, Bryant was the first name he mentioned.

"I was certainly pleased for Matt," Quinn said. "For a guy who's played a lot of football and made a lot of big kicks, for him to go to his first Pro Bowl at the age that he is, I think that's a real testament to his work, commitment, and dedication to what he does."

The honor comes in the same season Bryant passed Morten Andersen to become the Falcons' career scoring leader. Bryant's NFL-leading 135 points this season have given him a team-record 871 for his career. Andersen had 806.