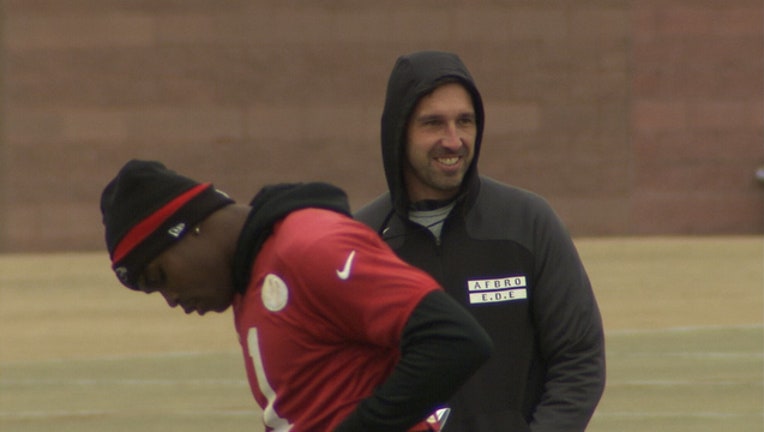 FLOWERY BRANCH, Ga. (AP) - Kyle Shanahan believes he is ready to become a head coach even though he doesn't feel pressured to leave his current role as Atlanta Falcons offensive coordinator.

"Absolutely not," Shanahan said Thursday when asked if he would take any job.

"I love the situation here," he said of his two years on Dan Quinn's Falcons staff. Shanahan added that becoming a head coach is "the goal of most people in our profession."

Shanahan, the son of former Denver Broncos coach Mike Shanahan, is expected to interview with the Broncos, Jacksonville, Los Angeles and San Francisco on Friday and Saturday.

Kyle Shanahan, 37, confirmed the Broncos are one of "a few teams" on his interview schedule. He said he believes he is ready to coach a team.

"Yeah, I definitely do," he said. "I think I have been. I think a lot of guys are. It's about getting that opportunity and hope it's the right fit."

Mike Shanahan was the Broncos coach from 1998-2008. Kyle Shanahan never worked for his father in Denver.

"I know some of the people in that organization, just growing up there," Shanahan said. "... I left there when I was in high school and haven't been back since. I've known the guys over the years most of my life. I've got a lot of respect for them for football people.

"That's really what is most flattering, when you've got respect for people and you really think they do things the right way and they're really about one thing and that's trying to win a Super Bowl."

Shanahan's NFL stock as a coaching candidate is high as the NFC South champion Falcons (11-5) lead the NFL in scoring.

Quarterback Matt Ryan, a leading MVP candidate , has flourished in Shanahan's offense. The Falcons have a wild-card bye this weekend, leaving Shanahan free to be interviewed.

"I think it would have been an impossible situation if we didn't win last week, but in the bye week it has actually been pretty convenient," Shanahan said. "... The whole staff and the players are going to get Friday and Saturday off, so that's when I'm taking care of that business."

Atlanta will play at home against Seattle, Green Bay or the New York Giants on Jan. 14.

The Falcons averaged 33.8 points per game to lead the league and earned the No. 2 seed by closing the regular season with a 38-32 win over New Orleans .

It was yet another impressive performance by Shanahan's offense.

On Thursday, left tackle Jake Matthews said Shanahan deserved much credit for the success of the offense. Matthews also said Shanahan would "be nothing but successful" as a head coach.

"Everything he's done since he's been here has been nothing but professional," Matthews said. "I think he's a great leader. The way he calls plays and runs this offense, he's one of the bigger parts of it. Obviously Matt and players are the ones executing it, but he's the brainchild of it all."

NOTES: Following short practices on Wednesday and Thursday, the team was given three days off. ... Coaches have studied each of the three possible divisional opponents, but practices this week focused on fundamentals. Practice for the divisional round game will begin on Monday. ... The team signed WR Anthony Dabl�� to a reserve/future contract. Dabl��, born in France, signed with the Giants last year but was released before the season.