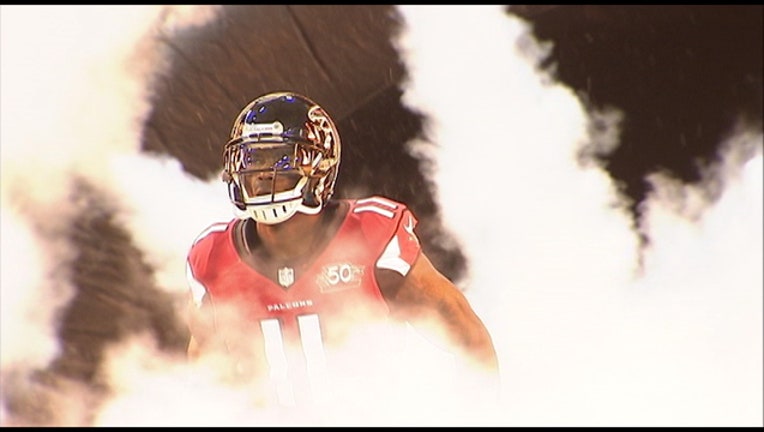 Jones had only limited participation in Thursday's practice after being held out Wednesday. He also was held out of the Wednesday practices each of the last two weeks to rest a sore right hamstring. He was listed as limited on Thursday's injury report with toe and hamstring injuries.

Offensive coordinator Kyle Shanahan said Jones "didn't do much" in the practice. Jones came out on the practice fields late in the portion open to reporters.

Jones didn't seem worried about his status for the game.

"I'm good to go," Jones said before the practice.

Quinn said he does not know when Jones hurt his toe. He said it is on top of Jones' foot and is not a turf toe injury.

"He's doing well with it," Quinn said. "I anticipate him being ready to rock."

Jones' health has become more important than ever for the Falcons (3-0) as he has enjoyed a record-breaking start to his fifth season.

Jones was asked in a conference call with Houston reporters this week if he was surprised by his statistics.

"Not at all," Jones said. "I feel like I'm capable of doing any and everything. I've just got to come to work every day. The main thing is staying healthy."

Jones had surgery in 2013 to repair the fractured fifth metatarsal in his right foot. He broke the same bone in the foot in 2011.

Jones' status as a franchise player was affirmed when he agreed to a $71.25 million, five-year contract extension, with guarantees of $47.5 million, before the season.

On Thursday Jones was named the NFC offensive player of the month.

Meanwhile, tight end Jacob Tamme was held out again Thursday as he goes through the NFL concussion protocol. Levine Toilolo may start for Tamme.

Running back Tevin Coleman (rib) was able to run but was not cleared for practice. Devonta Freeman is expected to make his second straight start after leading Atlanta with 141 yards rushing and three touchdowns last week. He also had five catches for 52 yards and may keep the starting job even when Coleman is cleared to play.

Wide receiver and return specialist Devin Hester (toe) and linebacker Brooks Reed (groin) had limited participation as they hope to play in their first games.