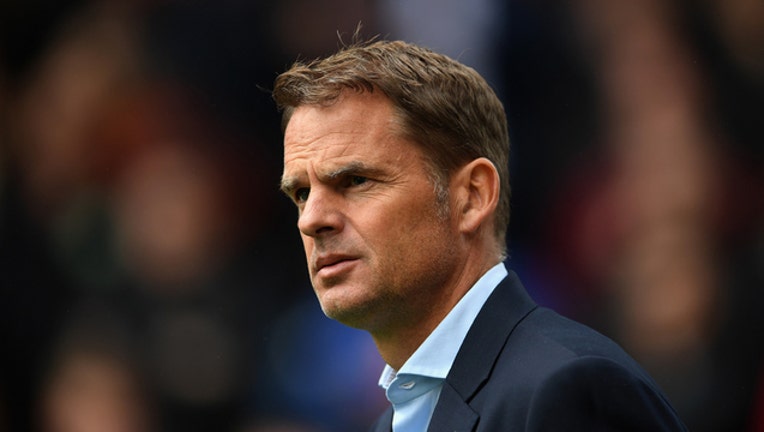 ATLANTA (AP) - Frank de Boer, who appeared in two World Cups for the Netherlands during an illustrious playing career and went on to capture four straight league titles as Ajax coach, is taking over at Atlanta United.

The Major League Soccer champions announced the coaching hire Sunday, with plans for a formal introduction after the holidays. The 48-year-old de Boer agreed to a multiyear contract to replace Tata Martino, who left Atlanta after two seasons amid reports that he is taking over as coach of the Mexican national team.

De Boer takes over a club that won the MLS Cup in just its second season and set numerous attendance records, averaging more than 53,000 per game. United returns to action in February, making its first appearance in the CONCACAF Champions League, before the start of the MLS season in March.

"I would like to build on the current success to develop a secure, solid foundation for the club at the top of MLS and beyond," de Boer said in a statement. "Aside from the club's ambitions, the values, culture and the philosophy for the entire organization are a vital part in realizing that point of success. This is exactly what I believe in as a person and as a coach. All of this combined, makes that I am really excited to be a part of it."

De Boer is looking to revive his coaching career after getting fired from his two previous jobs.

In 2016, he took over at Internazionale in Italy's Serie A but was dumped after less than three months on the job with the club mired in 12th place. The following year, de Boer had an even shorter stint at England's Crystal Palace, getting sacked after the team lost its first four Premier League games without scoring a goal.

Atlanta United is counting on its new manager to carry on the attacking style that worked so well under Martino.

"When we began our search, we were determined to find someone who fit all of our criteria," team president Darren Eales said. "Frank's philosophical views for how to play unequivocally aligns with ours. He also has a proven track record of developing youth players, with many of them going on to star for top European teams. Finally, his multilingual capabilities, including Spanish and English, ensure a smooth transition in the leadership of our club."

De Boer spent more than 15 combined seasons at Ajax and FC Barcelona during his playing career. He also made 112 appearances for the Dutch national team, helping lead his country to the quarterfinals of the 1994 World Cup and the semifinals in 1998, when he memorably launched a 60-yard pass that set up Dennis Bergkamp's last-minute goal against Argentina for a 2-1 victory in the quarterfinals.

After retiring in 2006, de Boer moved into coaching with Ajax's youth program. He became coach of the senior team midway through the 2010-11 season, leading Ajax to the first of four straight Eredivisie titles, an unprecedented feat in the club's storied history. During this run, de Boer relied heavily on players moving up from the youth program, many of whom went on to sign with larger clubs in the Premier League and across Europe.

Atlanta United has scored 70 goals in each of its first two seasons, led by star players such as Josef Martinez and Miquel Almiron. Martinez set a league scoring record and won MVP honors with 31 goals during the regular season and four more in the playoffs. Almiron was runner-up for the MVP award.

De Boer takes over team that likely will have to replace Almiron, who could be headed to the Premier League in a lucrative transfer deal. But United already has lined up his likely replacement, with River Plate star Pity Martinez announcing a move to Atlanta after leading his Argentine club to the Copa Libertadores title and a third-place finish in the Club World Cup on Saturday.

Atlanta also announced the re-signing of its captain, Michael Parkhurst. The 34-year-old defender will be back for his 10th MLS season after logging more starts and minutes than any United player over the last two years.