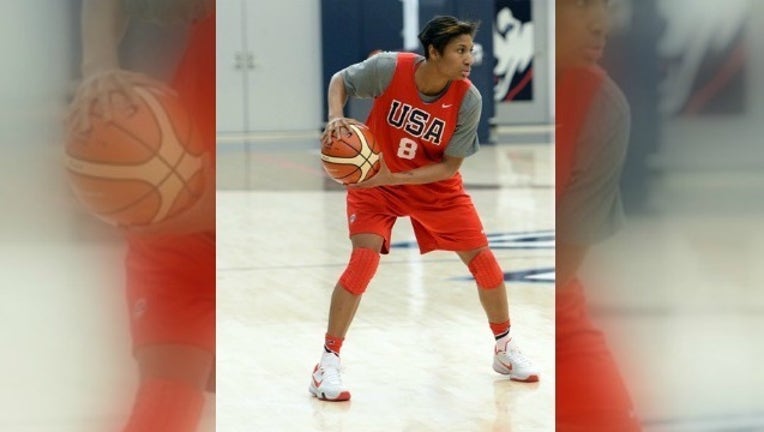 ATLANTA - Atlanta Dream standout Angel McCoughtry has been selected to the 12-member 2016 U.S. Olympic Team, which was announced Wednesday morning in front of a nationally-televised audience on NBC’s TODAY Show.

McCoughtry was a member of the 2012 gold-medal winning U.S. Olympic squad as well as a member of the 2010 and 2014 U.S. FIBA World Championship Team, each of which also captured gold.  During the 2012 London Games, McCoughtry averaged 10.9 points and a tournament second-best 2.5 steals per game.  She led all competitors in the 12-team tournament in field goal percentage (.620, 31-50).

“I think the emotion, I don't even know how to explain it, it's just a gut feeling because you're nervous about the call, and you don't even know what you're going to hear,” McCoughtry said.  “When you hear that you made the team, there's just this feeling you get, there's excitement, there's butterflies and the thought that, ‘Wow! I get to represent my country again.’ It gives you more motivation and makes you want to get ready even more. Like, I want to go to the gym right now just to get ready. There's definitely a motivation that you feel inside.”

With five-straight gold medals, the U.S. owns the longest Olympic gold medal streak ever recorded for a women’s traditional team sport. Canada (ice hockey) and Russia (synchronized swimming) have each strung together four consecutive gold medals. The only other nations’ teams to surpass five in a row are India (men’s field hockey) with six and the USA (men’s basketball) with seven.

University of Connecticut head coach Geno Auriemma will lead Team USA and is being assisted through the 2016 Olympic Games by DePaul University’s Doug Bruno, the Minnesota Lynx’ Cheryl Reeve and University of South Carolina’s Dawn Staley.

“Obviously it’s always incredibly difficult to try to identify 12 players from a group of so many great players,” Auriemma said, who has directed the USA National Team to an overall 23-0 record and gold medals at the 2012 Olympic Games and the 2010 and 2014 FIBA World Championships. “The committee had a really difficult job this year, because it's the first time in a long time that a lot more than 12 players could easily have been named to that team. But the 12 that were named are a great combination of Olympic gold-medal experience, multiple gold medal winners and great leaders.”

How did you feel when you found out you were going to be on your second Olympic team?

I think the emotion, I don't even know how to explain it, it's just a gut feeling because you're nervous about the call, and you don't even know what you're going to hear.  When you hear that you made the team, there's just this feeling you get, there's excitement, there's butterflies and the thought that, ‘Wow! I get to represent my country again.’ It gives you more motivation and makes you want to get ready even more. Like, I want to go to the gym right now just to get ready. There's definitely a motivation that you feel inside.

What does it mean for you to have another opportunity to represent your country through basketball?

You know what? It still hasn't hit me yet. Even from the last Olympics, it's like, ‘Wow, I’m really one of the best players in the world? I'm playing on the Olympic team?’ And then to win the gold, it's like, ‘Wow, we really are the best. We are really some of the best in the world.’ It's still hard to grasp. And I got to play with other great players like Diana (Taurasi) and Tamika (Catchings). It was like, ‘Wow I'm with them. I'm really here with them.’ And that is still such a humbling experience. I'm sure it will hit me soon, it will really sink in. This is just amazing.

How do you think you can help this team win gold?

Back in the 2012 Olympics, I was in the core group that brought energy to the team off the bench. We came in the game, and you didn't lose that energy. Now we've gotten a little bit older, so that core group is definitely a little bit older, so we definitely have to get smarter. I think what I bring personally is to continually bring that energy off the bench and be a defensive stopper. And that is what Geno (Auriemma) talks to me about, me being a good defensive stopper off the bench. We have a lot of players who can score. We know anybody can score on any day on this team, so that's not the issue. So what can I do outside of scoring is getting steals, rebounds pumping the team up, giving them that energy they need. That is the role that I have embraced and will continue to embrace for the 2016 Olympics.

Your first USA Basketball trip – your first gold medal – was at the 2007 Pan American Games in Rio de Janeiro. What are some of your memories from that trip?

I really enjoyed learning from Dawn (Staley, who was the head coach of the 2007 USA team). She's one of the coaches who has really helped me grow my career. In the Pan Am Games I did not start very well. I was nervous, but she told me, ‘Angel, just play.’ And I wound up having some of my best games. So that was my first experience in an Olympic-type setting. It really helped me grow. I learned a lot, and now I am excited I’m going back to Rio. I'm 30, I've grown a lot, my maturity is there and I think I can really help the team on another level.