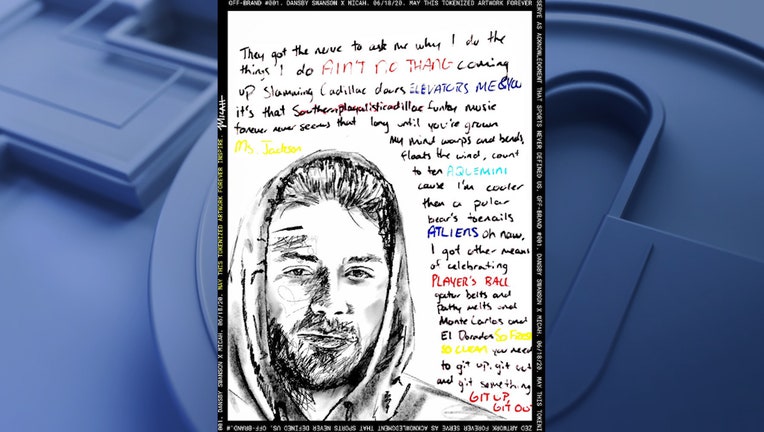 Former Brave Micah Johnson and current Braves shortstop Dansby Swanson worked together on a piece of art, which goes on sale Thursday

"It's as old-school as you can get when it comes to collaboration," said Micah Johnson.

Johnson, who played for the Braves in 2017, is now a full-time artist. On Thursday, a new piece of artwork goes on sale, that was done by Johnson and current Atlanta shortstop Dansby Swanson.

"[Swanson] was so excited about it, which really energized me," said Johnson. "He'd text me late at night, talking about what he wanted to do. It was really cool to see how thought out Dansby was with this."

Johnson did a portrait of Swanson on canvas, leaving about half the space left to fill. He mailed his work, along with high quality paint, to Swanson to complete. The Marietta High School alum decided to pay homage to Atlanta, and one of its most famous musical groups, Outkast. He wrote some of his favorite Outkast lyrics on the canvas in black paint, writing the song titles on color. The colors he used match the primary color of the Outkast album cover the song appeared on.

"It's really clever," said Johnson. "I said, 'dude, you need to chill out before you take my clients, man.'"

The artwork goes on sale Thursday night at 7pm to the general public. There will only be a limited number available. That is where things get a little complicated: all the artwork sold will be in digital form.

The term used for this new form of art collection is "non-fungible token," abbreviated "NFT," or called "nifty" for short. These are works of art that are bought and sold digitally, using unique IDs and blockchain technology to prove a piece is an original.

"With a specific ID attached to these in the digital world, since they can't be edited, they can't be altered or anything like that," said Johnson. "It's incredibly secure, nerdy stuff. That's how you can prove it's an original."

Johnson says you can think of them like "digital collectibles," and he says many buyers are able to resell their NFTs for more than they paid. Some buyers seem to see the digital artwork as investments; but Johnson says they can also be displayed in digital frames, on televisions or on websites.

"Once there's these [digital] screens that can be developed, it's going to take off," said Johnson. "There's going to be screens at home with art all over it."

For the piece with Swanson, Johnson digitized the final product, and let Swanson keep the one original. They are also selling an even more limited animated version of their piece.

Johnson says it is a new frontier in art, but one he's excited to be a part of. Swanson is the second athlete Johnson worked with, after producing a portrait of George Floyd with minor league baseball player Matt Szczur recently. Digital copies of that piece sold out in minutes, while the original sold in an online auction. Proceeds went to charity.

"The thing is, it kind of works out, because a lot of these [baseball players] have so much free time now because, for whatever reason, MLB can't figure out how to play," said Johnson. "It gives them the opportunity to express themselves and do something different."

Johnson says he has collaborations with other athletes in the works, but does not want to get into specifics.

50 digital editions of the piece Johnson and Swanson produced go on sale Thursday at 7:00pm through a website called Nifty Gateway. They are listed at $225 each. For more information on the sale, here is a link to their blog: Nifty Gateway Artwork Sale Info

If you're interested in learning more information about digital art that uses blockchain technology, here is a good primer: BlockGeeks NFT Article