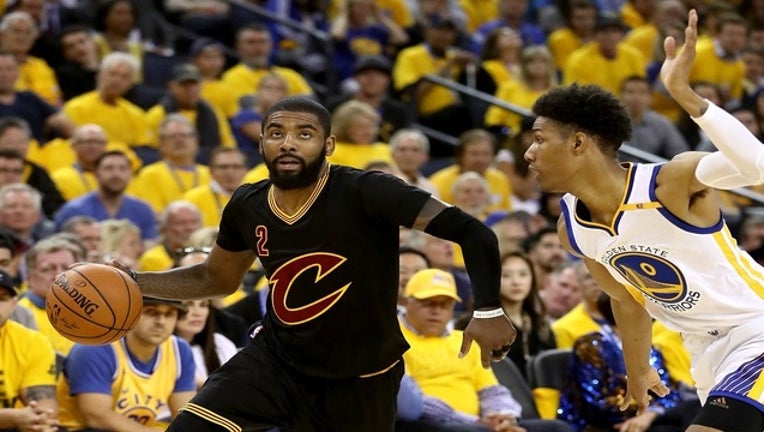 OAKLAND, CA - JUNE 12: Kyrie Irving #2 of the Cleveland Cavaliers drives with the ball against Patrick McCaw #0 of the Golden State Warriors in Game 5 of the 2017 NBA Finals at ORAC

Kyrie Irving's next cross-over will come against the Cavaliers.

Cleveland's All-Star guard, who asked owner Dan Gilbert to trade him earlier this summer, was dealt Tuesday night to the Boston Celtics in exchange for star Isaiah Thomas, forward Jae Crowder, center Ante Zizic and a 2018 first-round draft pick, a person familiar with the deal told The Associated Press.

Since Irving made his stunning request, the defending Eastern Conference champions have been looking for a trade partner. They found the perfect one in the Celtics, who will now build around Irving and newly signed free agent Gordon Hayward.

Irving's first regular-season game for Boston will be against Cleveland as the Cavs will host the Celtics on Oct. 17 -- a date being circled by fans already.

Irving, who made the biggest shot in Cleveland history to win the 2016 NBA Finals, is joining a Boston team that lost to Cleveland in last season's conference finals and has been unable to unseat LeBron James and Co. in recent years.

The Cavs were concerned about getting equivalent value for Irving, who has two years remaining on his contract, but in the 5-foot-9 Thomas they are adding one of the league's most dynamic playmakers. Thomas averaged 28.9 points last season. He missed most of the East finals with a hip injury.

The 28-year-old Thomas, taken with the final pick in the second round in 2011, can become a free agent when his contract ends after next season.

His reputation in Boston was cemented when he led the Celtics through the playoffs last season despite the death of his sister on the eve of the postseason. He also had a front tooth knocked out during the second-round series against Washington and the hip injury eventually forced the team to shut him down early in the East finals, won by the Cavaliers in five games.

Thomas believes he is worthy of a maximum contract and has quoted saying, "They better bring out the Brinks truck."

Cleveland is also getting Crowder, a solid perimeter defender, and a first-round pick that Boston got from Brooklyn. The package could help the Cavs reload if James opts out of his contract next summer and leaves Cleveland for a second time.

The Cavs drafted Irving with the No. 1 overall pick in 2011. He struggled in his first few seasons but blossomed in recent years alongside James. However, that didn't seem to be enough for the 25-year-old, who has wanted to be the prime player and focal point on his own team.