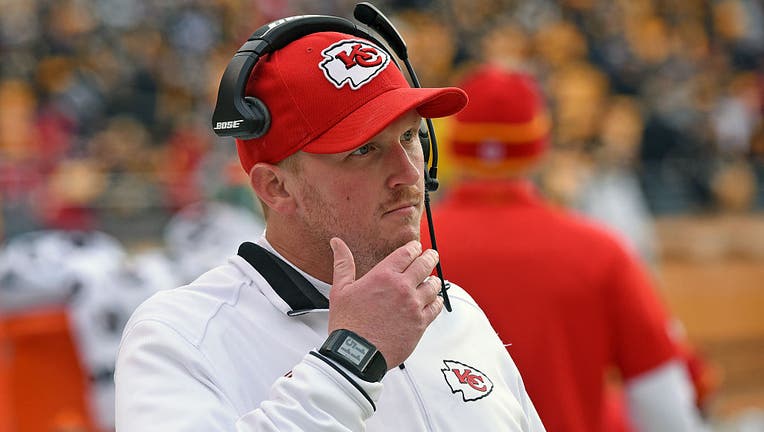 Coach Britt Reid of the Kansas City Chiefs looks on from the sideline before a game against the Pittsburgh Steelers at Heinz Field on December 21, 2014 in Pittsburgh, Pennsylvania. (Photo by George Gojkovich/Getty Images)

The Kansas City Chiefs and Britt Reid will be heading their separate ways.

According to an ESPN report, Reid was placed on administrative leave with the Chiefs through the duration of his contract, which has expired and he is no longer an employee with the team.

On Wednesday, the NFL released a statement to FOX4 regarding the ongoing situation surrounding Reid after he was involved in a multi-car crash near Arrowhead Stadium last Thursday night.

"Our primary concern is for the young girl, her family, and the others who were injured," the NFL said in a statement. "The matter will be reviewed under the NFL’s personal conduct policy. We will continue to monitor developments and when law enforcement has completed its review we will address this matter and take any appropriate action."

On Saturday morning, police were granted a search warrant to search into Reid’s cell phone to "help determine if there was any phone activity prior to or at the time of the crash, and whether the phone was subsequently used to discuss the incident with other persons," according to the search warrant application via KSHB-TV.

Reid told responding officers he had two to three drinks and was on an Adderall prescription at the time of the incident, according to FOX4 KC. He also complained of stomach pain and had surgery.

Howard Lotven, a Kansas City attorney, told the station that tests taken for blood alcohol are sent to the Missouri State Highway Patrol Lab and can take weeks to process.

"That usually takes 4-8 weeks. Only because they are testing those blood tests from all around the state," Lotven told FOX4 KC.

Andy Reid, the father of Britt Reid, was asked about his son again Monday in his post-Super Bowl press conference.

"That little girl, my heart goes out to her," Andy Reid said, via KSHB-TV.

He added that his son was "doing better now."

A football super fan in Kansas City geared up for the big game by updating his yards home field with end zones and the Super Bowl LV logo on Friday, February 5.

"I’ve had a chance to talk to him. Again, my heart goes out to that young lady. I’m also a dad, so I get that. I have concerns obviously on both sides," he said.

Tiffany Verhulst, who set up the GoFundMe donation page, gave a brief update about Ariel’s condition on Tuesday.

"Just trying to update every day. No changes in how she is doing. She is still not awake. Please continue to send prayers for her to wake up and recover from this horrific crash. Thank you, Tiffany Verhulst," she wrote.

A GoFundMe set up to raise money to cover her medical expenses has received more than $440,000 as of Wednesday night.