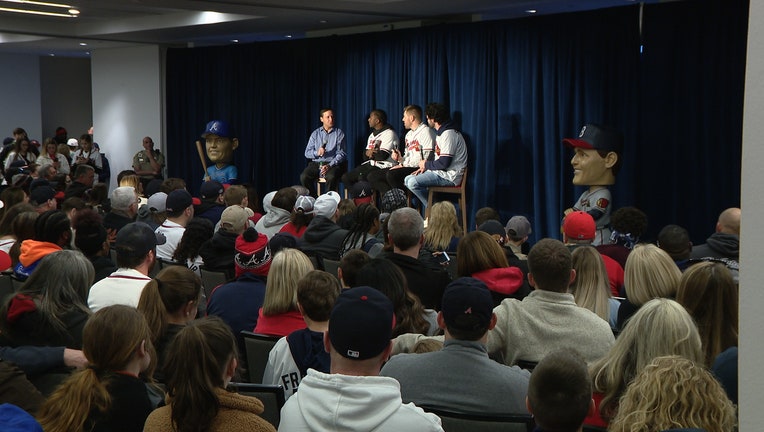 It was indicative of the excitement of a fresh slate with a new season around the corner and the promise his team has heading into 2020 — but personally, he said, he is pain-free for the first time in nine years.

A week after the Braves' season ended with a Game 5 NLDS loss, Freeman went into surgery to remove two bone spurs and three loose fragments in his elbow.

All the players recognize they fell short of their expectations in 2019. But watching the Washington Nationals win the World Series hurt even more, they said Saturday.

"The hunger is real. Winning back-to-back division titles and seeing a division opponent win the World Series last year, it's our turn," Freeman said. "We've got a really good team again, so it's our turn. It's our time to take the next step."

"It was pretty emotional. I definitely had a lot of tears. I'm not ashamed to admit that," said shortstop Dansby Swanson.

Freeman said he was thankful to have the elbow rehab to keep him busy after the way the Braves' 2019 season ended. For the rest of the team, Swanson said it was hard to transition into the offseason.

"I think the offseason got started in a lull. It felt like this limbo stage," Swanson said. "It was tough. It really was. But when we started signing some of the guys and you kind of get this newfound feeling of excitement, it was kind of like the organization as a whole had turned the page from this last season. So it kind of almost gave us permission to do the same thing. (But) it took a little bit. It really did. It stung."

Some of those newly-signed Braves include lefties Cole Hamels and Will Smith, catcher Travis d'Arnaud and outfielder Marcell Ozuna.

"Alex (Anthopoulos) has been busy this offseason," Freeman said. "He spent a lot more money than a lot of people were expecting, and it's exciting to see that we're going for it. We've got a great team and a great chance to win a World Series this year."

"All he does is try to amke this team better, and he's really good at it," manager Brian Snitker said. "I like all the moves. I've talked to all the guys. Everybody is really excited to be here and be a part of what we've got going on."

Meanwhile, the departure of now-Twins third baseman Josh Donaldson means Johan Camargo and Austin Riley will be the Braves' options at the hot corner.

"They haven't said anything (about who may start)," Riley said. "I've been doing outfield work, I've been doing third base work. I kind of go into it ready for anything."

Riley said he and Johan Camargo "have got a great relationship" and he looks forward to that competition.