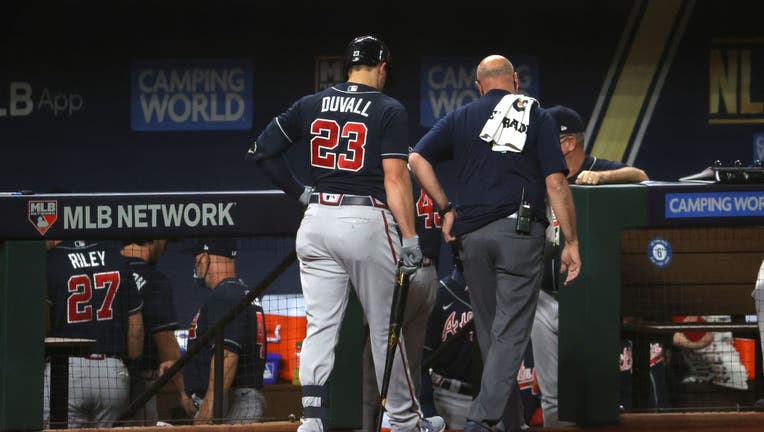 ARLINGTON, TEXAS - OCTOBER 12: Head athletic trainer George Poulis escorts Adam Duvall #23 of the Atlanta Braves off the field after an injury during the second inning in Game One of the National League Championship Series against the Los Angeles Dod

ARLINGTON, Texas - Atlanta Braves outfielder Adam Duvall will miss the rest of the postseason because of an injury to his left side.

He was replaced on the roster for the NL Championship Series against the Los Angeles Dodgers by infielder Johan Camargo. Duvall will not be eligible to play in the rest of the postseason.

Camargo hit .200 with four homers and nine RBIs in 120 at-bats this season and was not on the roster for the first two rounds of the playoffs. His only previous postseason experience was in 2018, when he was 0 for 15 and the Braves lost to the Dodgers in the Division Series in four games.

Duvall hit .237 with 16 homers and 33 RBIs this season and was 2 for 20 with a home run and three RBIs in the playoffs. He hit a two-run homer off Raisel Iglesias that drove in the final two runs in the 5-0 win over Cincinnati in Game 2 of the first round, completing a two-game sweep.