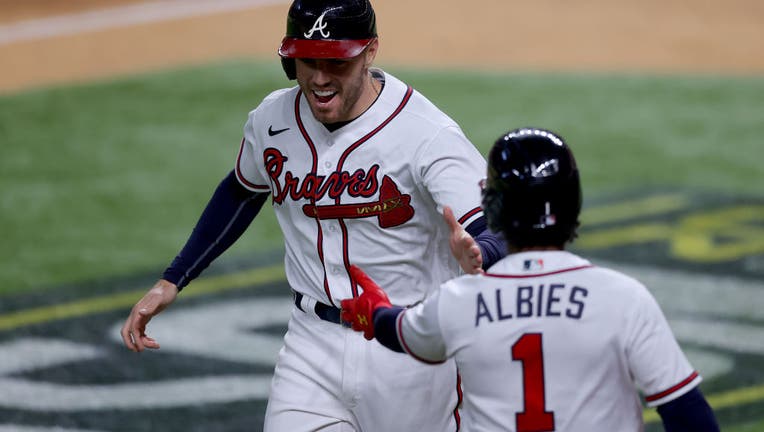 Freddie Freeman celebrates after scoring a run against the Los Angeles Dodgers during the sixth inning in Game Four of the National League Championship Series.

ARLINGTON, Texas - Ian Anderson doesn’t remember the last time the Atlanta Braves were in a Game 7.

That’s because the 22-year-old rookie right-hander wasn’t born yet.

Anderson will take a 15 2/3-inning scoreless streak at the start of his postseason career into the deciding game of the NL Championship Series against the Los Angeles Dodgers after the Braves lost their second in a row, 3-1 on Saturday.

It’s one game for a chance to meet Tampa Bay or Houston in the World Series, just the second NLCS to go the distance in 15 seasons and the first time since 2004 that both league championship series have gone seven games.

If Tony Gonsolin goes for the Dodgers on Sunday night, it will be the first winner-take-all postseason game started by two rookies. It would also be a rematch of Game 2, won 8-7 by Atlanta when the Braves hung on in the ninth inning long after Anderson and Gonsolin were gone.

“I think you have to go out there and compete,” Anderson said. “Whether you punch them first or they punch you first, you have to find a way to stay in the fight and just compete as hard as you can.”

In Major League Baseball’s first neutral site postseason, the league championship series are played on consecutive days off with no time off, more akin to strenuous stretches of summer’s dog days than the high-stakes spectacles of October.

That means the aces will be Game 7 spectators after Walker Buehler pitched six shutout innings to beat Max Fried in Game 6 at the home of the Texas Rangers, also the site of the World Series starting Tuesday.

The Braves are trying to get back to the World Series for the first time since 1999, while the Dodgers are in their majors-leading seventh LCS since 2008 but still looking for their first championship in 32 years.

“I think it’s the same situation as a Game 2, Game 3, Game 4, Game 1,” Gonsolin, the 26-year-old right-hander, said in a dispassionate monotone hours before the Dodgers’ win. “It’s all the same to me. Just got to go out there and throw my game.”

It’s the first postseason for both, with Anderson probably feeling a little bit more weight of history.

Atlanta’s last Game 7 was a 15-0 win over St. Louis in the 1996 NLCS, before losing the World Series to the New York Yankees in six games. He was born about 19 months later.

Now the Braves are trying to avoid losing the NL pennant for the first time after winning the first two games of a seven-game championship series, in their first NLCS appearance since 2001.

The franchise has blown a 3-1 series lead just once, in 1958, when the Milwaukee Braves lost the World Series to the New York Yankees.

“I think he’ll handle it great,” Braves manager Brian Snitker said. “The experience I’ve had with this kid for the last two months, he wouldn’t lead me to believe any other way.”

Anderson has been unflappable so far in these playoffs.

The young righty from upstate New York struck out nine in six scoreless innings to beat Cincinnati in the wild-card clincher, then added another 5 2/3 innings without a run while fanning eight for another win against Miami in the Division Series.

Anderson was out after four scoreless innings against the Dodgers because of a career-high five walks, while Gonsolin gave up five runs in 4 1/3 innings.

“He’s as prepared and smart as they come,” said Fried, who combined with Anderson and Kyle Wright to help the Braves become just the second team to start a postseason with four shutouts in five games. “You would never know that it was his rookie year, the way that he handles himself, poise and everything.”

The Dodgers are in a Game 7 for the third time in four seasons. LA beat Milwaukee 5-1 in the deciding game of the 2018 NLCS after losing 5-1 to the Astros in Game 7 of the 2017 World Series.

“We have a confident group,” said Justin Turner, LA’s franchise leader in career hits in the postseason. “Everyone from one guy to the next, all of the way down the line, we trust each other.”

You can catch the game starting at 8 p.m. Sunday night on FOX 5.