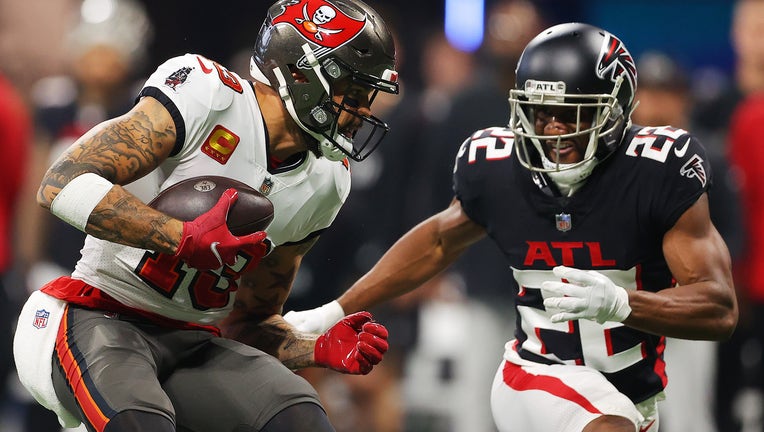 ATLANTA, GEORGIA - DECEMBER 05: Mike Evans #13 of the Tampa Bay Buccaneers carries the ball after a reception as Fabian Moreau #22 of the Atlanta Falcons defends during the first quarter at Mercedes-Benz Stadium on December 05, 2021 in Atlanta, Georg

ATLANTA - Tom Brady threw for 368 yards and four touchdowns — two of them to longtime favorite target Rob Gronkowski — and the Tampa Bay Buccaneers moved to the brink of clinching the NFC South title with a 30-17 victory over the Atlanta Falcons on Sunday.

The Bucs (9-3) won their third straight game and pushed their division lead to four games over Atlanta, Carolina and New Orleans (all 5-7) with five games remaining.
Brady improved to 10-0 in his career against the Falcons, including four straight wins over the last two seasons since moving from New England to Tampa Bay.

The 44-year-old Brady completed 38 of 51, including touchdowns of 27 and 11 yards to Gronkowski — their first scoring passes since Week 2 against the Falcons.
The prolific duo has combined for 90 regular-season TDs, passing Phillip Rivers and Antonio Gates for No. 2 in NFL history. Only Peyton Manning and Marvin Harrison have more, hooking up for 112 scoring passes.

Brady shook off a huge blunder in the final minute of the first half, when 278-pound defensive lineman Marlon Davidson picked off a short pass and glided 3 yards into the end zone for a touchdown that cut Tampa Bay’s lead to 20-17 at the break.
The Bucs came out throwing. For the first time since 2004, they passed the ball on their first 13 plays of a game — accounting for the entire 75-yard touchdown drive on their opening possession.

Brady completed 11 passes on the drive, including a 6-yard throw to Leonard Fournette on fourth-and-4 at the Atlanta 38. The two hooked up again for a 3-yard touchdown play, with Fournette making a slick, one-handed grab.
The Falcons answered with a touchdown drive of their own, doing most of their damage on the ground.

Cordarrelle Patterson broke off a 39-yard scamper before Mike Davis ran for a 17-yard touchdown.

Tampa Bay finally ran the ball on the first play of its next possession, but again it was Brady’s arm that accounted for most of the production on another 75-yard touchdown drive.

He went to Chris Godwin for 25 yards and Mike Evans for 36 yards to set up another 3-yard scoring pass, this one to Cameron Brate. A missed extra point left the Bucs with a 13-7 lead.

Atlanta squandered a chance to pull ahead, settling for a field goal after having first-and-goal from inside the 1. Ryan lost a couple of yards falling on a bobbled snap, sandwiched around a pair of incompletions that forced the Falcons to send in Younghoe Koo for a 21-yard field goal.

Brady’s 27-yard TD to Gronkowski had the Bucs on the verge of a blowout.