HAMPTON, Ga. - The oldest racing surface currently on the NASCAR Cup Series schedule will be getting a facelift after this weekend's Quaker State 400.

After years of debate and driver protests regarding Atlanta's uniquely challenging track that was last repaved in 1997, AMS will redesign its banking, narrow the racing surface, and repave its track.

The "next generation Atlanta Motor Speedway" will be "making its debut in 2022 in conjunction with NASCAR’s Next Gen car," track official said.

"As Atlanta’s racing surface has aged, we’ve challenged ourselves to reimagine what NASCAR racing at an intermediate track can be," Speedway Motorsports President and CEO Marcus Smith said in a release. "With high banks in the turns, narrower width and new pavement technology, Atlanta will be unlike any other mile-and-a-half track on the circuit. It’s all new for ’22 and this will be specifically designed for close, competitive racing."

After 10 months of research, development, testing and simulation with engineers and iRacing, AMS will increase the current 24-degree banking in its turns to 28 degrees, which will be higher than any other intermediate track on the current NASCAR circuit. Straightaway banking will remain five degrees. 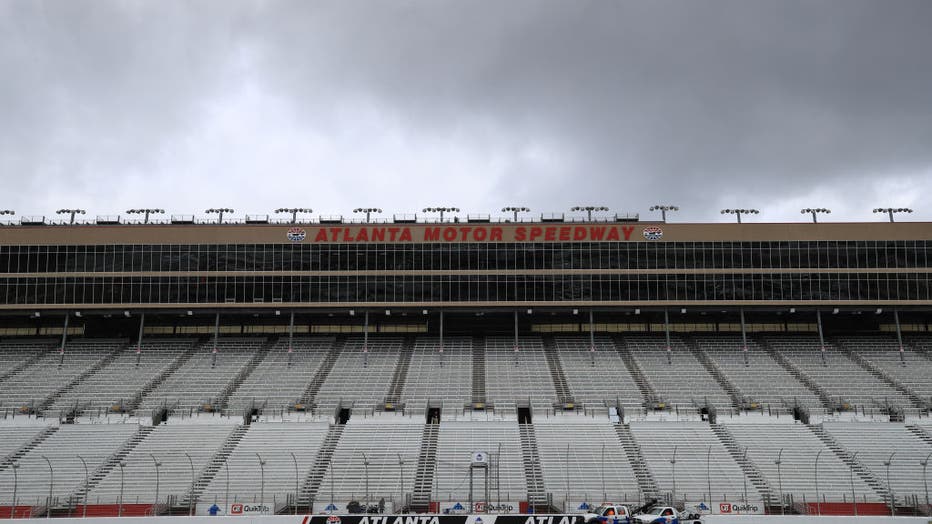 HAMPTON, GEORGIA - MARCH 13: A general view of the track and pit road at Atlanta Motor Speedway on March 13, 2020 in Hampton, Georgia. NASCAR is suspending races due to the ongoing threat of the Coronavirus (COVID-19) outbreak. (Photo by Chris Grayth

The racing surface will also be narrowed in width from 55 feet to 40 feet. New widths will be 52 feet on the front stretch, 42 feet on the back stretch and 40 feet in the turns, AMS said.

"Our operations staff has done everything possible to extend the life of our racing surface, and as a result fans have enjoyed some historic moments and fantastic finishes at Atlanta," AMS Executive Vice President and General Manager Brandon Hutchison said in a release. "While this asphalt cannot outlast Father Time, the memories of the great racing will last forever. NASCAR’s best will have one more chance to add to the legacy of this surface with a grand finale at the Quaker State 400 Presented by Walmart on July 11."