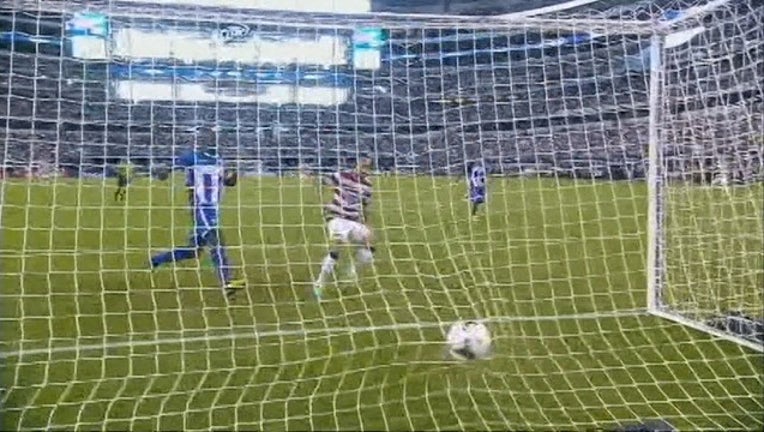 SOCHI, Russia (AP) - Amid ongoing confusion surrounding video assistant referees, FIFA briefed coaches on Wednesday on how the technology should operate at the World Cup.

All that's required now is official approval for VARs to be deployed at the June 14-July 15 tournament in Russia.

Soccer's most significant adoption of technology is set to be formally voted into the laws of the game by a FIFA-led body on Saturday, clearing the path for the World Cup debut of VARs.

That's despite the confusion that has often been created by referees deferring to VARs during games, as has been evident in European trials including an FA Cup game at Wembley on Wednesday.

Even ahead of the vote by the International Football Association Board, FIFA President Gianni Infantino has already said that VARs must be at the World Cup to eradicate errors on the game's biggest stage. FIFA has also been searching for a sponsor whose branding could appear when the video reviews are in action.

The governing body spent time during a pre-World Cup workshop in Sochi this week to inform coaches from the 32 teams that how the procedure will work when referees seek guidance from the VAR or check replays themselves on a pitch-side monitor. The seminar appeared to reassure coaches with some reservations.

"They have discussions (for VAR) to be approved in a couple of days, but it is obvious football cannot keep going with its eyes closed to the modern world and what is going on around us," Iran coach Carlos Quieroz said. "VAR is just a baby. Football is more than 100 years (old). VAR was born five years ago.

"In 10 years, 15 years everything will be much better. Look at tennis and other sports, nobody is arguing about a couple decisions in the game. The main thing for football it is simplicity and credibility."

The most regular use of VAR in high-profile club games has been in Germany's Bundesliga and Italy's Serie A. The Premier League has resisted being part of the trials, leaving FA Cup and League Cup games to endure the teething pains.

Unease over the technology has largely centered on the lack of in-game explanations for fans, coaches and television audiences over when and how decisions are reached using video review.

"Making the correct decisions for everybody is something we all want," England assistant manager Steve Holland said. "That obviously has got to be done in as slick and efficient manner as possible. From the information we've been given today we have no reason to believe that won't be the case."

Holland was in Russia last June for the Confederations Cup to experience the delays taken to reach decisions and the chaos over the lack of public information from referees.

"It's fair to be said there were one or two issues that didn't run 100 percent smoothly," Holland said. "But it's a process and I am sure that they've learnt from that. I would anticipate that should be much further on if they do use the system (at the World Cup)."

The uncertainty of the referee overseeing Tottenham's 6-1 victory over Rochdale in the FA Cup on Wednesday led to constant VAR referrals and five minutes being added on in the first half. Tottenham defender Kieran Trippier complained it was "crazy" as it took "the momentum out of the game." Tottenham manager Mauricio Pochettino felt it was "difficult to stay focused on the football."

VARs should only be called into action to provide referees with the video assessment on game-changing decisions in four situations: Goals, penalties, red cards and cases of mistaken identity.

IFAB will review the result of live trials when it meets in Zurich on Saturday before approving the wording for VAR-related changes to the laws of soccer along with the official protocol. FIFA has half of the eight IFAB votes, with the four British home nations holding the others. Six votes are required to amend the laws.

Referees were assisted for the first time by high-tech aids at a World Cup in 2014 when goal-line technology was used. That system sees a message instantly flash on referees' watches saying only whether the ball crossed the line.