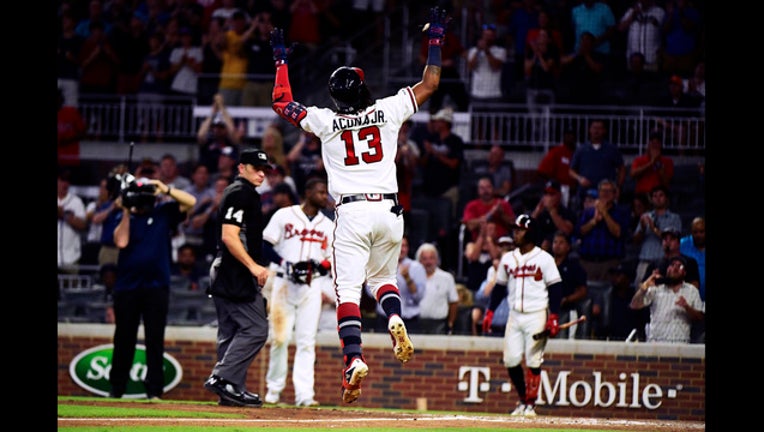 ATLANTA, GEORGIA - AUGUST 21: Ronald Acuna Jr. #13 of the Atlanta Braves celebrates hitting a home run in the fifth inning against the Miami Marlins at SunTrust Park on August 21, 2019 in Atlanta, Georgia. (Photo by Logan Riely/Getty Images)

The Braves are 14-4 against Miami this year after winning the 2018 season series between the NL East rivals 14-5.

Teheran (8-8) combined with Sean Newcomb and Josh Tomlin for a seven-hitter. The right-hander allowed five hits in seven innings. In five starts against Miami this year, he has now allowed just one run in 32.0 innings (0.28 ERA).

Acuña's shot off Caleb Smith (8-7) in the fifth cleared the center field wall. His team-leading 36th homer came one night after he was hit by Elieser Hernandez's first pitch, leading to the ejection of Braves manager Brian Snitker. It was also the 16th homer he has hit against Miami in his young career.