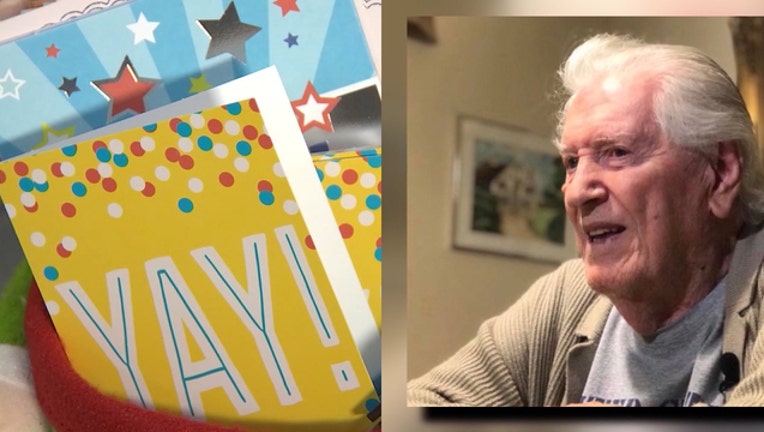 LAKELAND, Fla. (WOFL FOX 35) - At Winston Academy of Engineering, in Lakeland, Florida, writing takes precedence over hard science on one particular day. For a few minutes, a fifth grade class writes to someone they don’t even know.

They're busy writing cards, but these cards aren't for Christmas.  These are birthday cards that will be sent to a World War II veteran, to fulfill one of his most heartfelt wishes.

Duane Sherman is a Navy veteran who has seen a lot in his time. In 1944, Sherman‘s ship was hit by a kamikaze pilot, resulting in 30 deaths.  Sherman was wounded in that incident and later received a Purple Heart.

Sherman, who will be turning 96 in a few weeks, wants only birthday cards as his gift -- as many as possible.

That pulled at the heartstrings of sisters Cadence and Aubrey Waraksa, so they got their schools, Winston and Lawton Chiles Middle Academy, involved.  Now, even the Lakeland Police Department is participating.

"We’re going to take the cards to our briefing, so all the officers -- before they head out on the streets -- sign a card and say 'thank you' to this gentleman," explained Robin Tillett, a police department spokesman.

Cards are also in the police department's lobby for anyone to sign.

"And feeling that they are making a difference in that person’s life,’’ said Cory West.