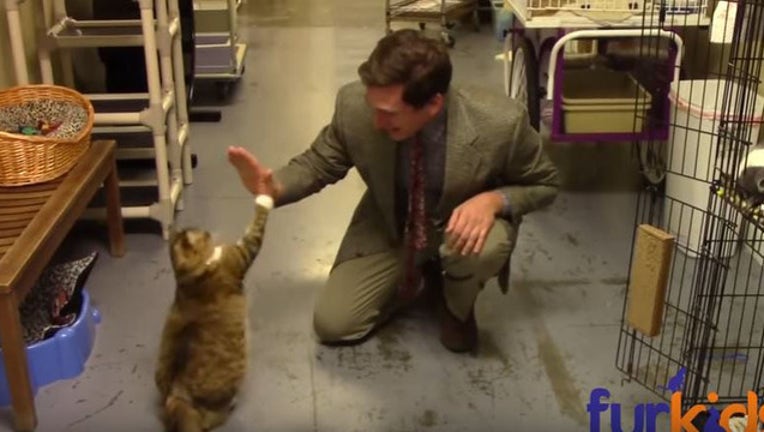 ATLANTA, Ga. - A hilarious (very) low-budget ad for pet adoptions at an Atlanta no-kill animal shelter has been seen by more than a million viewers after going viral online.

The ad shows Paul Preston outside the Furkids Animal Rescue and Shelters in Atlanta, waving his arms wildly and imploring people to "Come on down!"

Inside, he shows off the black cats, the big cats, the hungry cats, the "self-cleaning" cats, and he even gets an  on-the-spot high-five from one of the cats.

If cats are not your thing, he says, try "this thing called 'dogs!'" he says. At the end, he busts out into his own version of Sarah McLaughlin's "Angel," but with an entirely revamped track of his own.

His humor mixed with compassion and of course, the adorable animals, has apparently touched a nerve online and has been shared on the social media site Reddit, garnering more than a million views.

Preston is the brother of one of the volunteers at the shelter, Helen Preston, who helped dream up the commercial with the Adoption Team Manager, Nicole Neill, after a day of adoptions one late Saturday afternoon.

"Paul is naturally clever and his hilariousness has clearly resonated with people," said Samantha Shelton with Furkids. "We hope this will interest people to visit their local animal shelter and adopt!" she said.

According to the organization's website, Furkids is a nonprofit that operates the largest cage-free, no-kill shelter in the Southeast for rescued cats and Sadie’s Place, a no-kill shelter for dogs.