TAMPA, Fla. - It’s Christmas Eve in Tampa, which typically means balmy temperatures, tank tops, and a trip to the beach.

But on 62nd Street, Christmas Eve is looking a little different. Crews spent all morning turning hundreds of bags of ice into eight tons of snow, and it was all to surprise one Army veteran - who was brought to tears by the sight.

These were tears of joy, but this past year, however, has brought many of the other kinds of tears to Albert Septien.

“This year has been hell because I have never been sick in my life and now here I am,” he said.

The Vietnam veteran was diagnosed with stage four melanoma, believed to be caused by his exposure to Agent Orange during his time in the service. Septien served in Vietnam for a year and was responsible for recovering bodies after the Tet Offensive ended in September 1968. 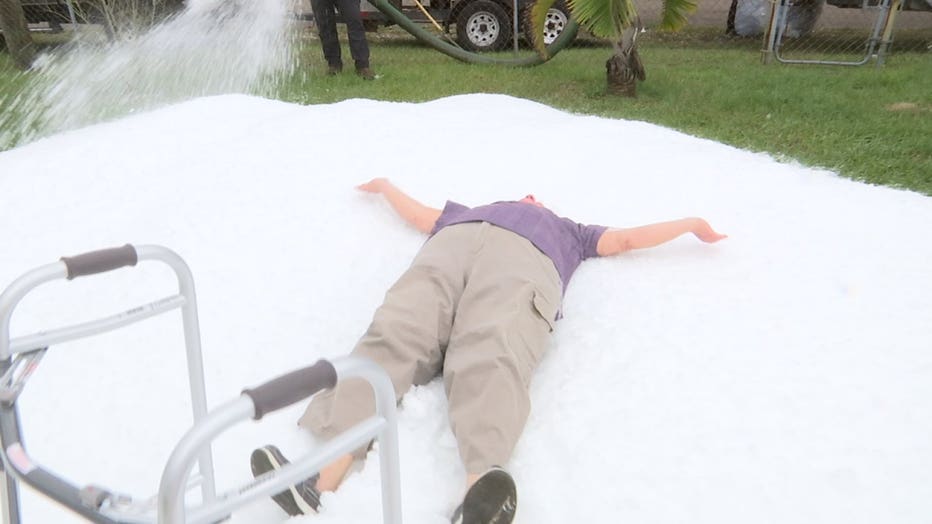 The diagnosis was made in May and then, a day after Thanksgiving, he found out the cancer had metastasized. Doctors told him this will be his last Christmas, so his cousin Joe wanted to make it extra special.

Albert was born in Cuba, but raised in Connecticut and New York. He grew up making snowmen and shoveling snow. But he’s lived in Florida now for years and it’s been a long time since he’s seen snow around Christmas.

Maestre was up for the challenge, with the help of many who donated throughout the Tampa Bay area. The moment his cousin walked outside to see the wintry wonderland was worth every moment of preparation.

“I don’t think there’s words to explain it,” Maestre said. “The look on his face, the feeling in his heart. The tears that he had. This has been the most wonderful day in the last year.”

Albert says the treatment has caused burning sensations all over his body and feels like he has a built-in furnace. Living in Florida with the heat, he says, makes it even worse.

“When I laid down in that snow, it felt really good,” he said.

“I’m just happy that we were able to put this all together and all the people that really reached out to remember a Vietnam veteran,” Maestre said. “That to me means so, so much.”

The veteran who wanted to remember, for one day, what it felt like to be a kid again and enjoy a white Christmas.