An off-duty firefighter helped remove a colony of bees that swarmed a vehicle parked at a supermarket in Las Cruces, New Mexico, on Sunday, March 28, the Las Cruces Fire Department (LCFD) said.

LAS CRUCES, N.M. - Shocking video and photos posted on social media captured the moment an off-duty firefighter helped remove a colony of bees swarming a parked car in a supermarket in New Mexico.

The Las Cruces Fire Department (LCFD) posted photos of firefighter Jesse Johnson, who happens to be a beekeeper as a personal hobby, removing a giant swarm of bees bunched up together on a shopper's car.

After blocking off the area to keep people safe, the department says Johnson arrived with his bee-keeping equipment including a hive kit, lemongrass oil, gloves and proper attire to save the day. 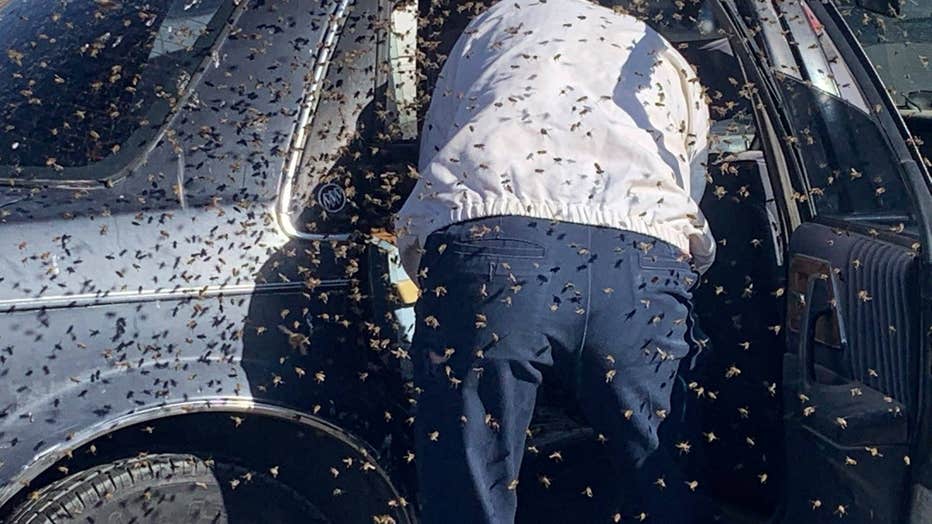 The Las Cruces Fire Department in New Mexico says 15,000 bees were relocated after they swarmed a car parked at a local grocery store. (Credit: Tony Contreras via Storyful)

"Johnson arrived with the proper tools for the trade – a hive kit, lemongrass oil, gloves and proper attire – and was successful in removing the bees from the car and relocating them to a more suitable location, LCFD wrote on Facebook. "Estimated 15,000 bees were removed and relocated to Johnson’s property that’s outside of city limits. The fire crew was on scene for nearly two hours while the bees were removed and rehomed. A security guard at Albertson’s was stung and it is possible a few patrons may have had close encounters, but no major injuries were reported."

Tony Contreras posted a video on Facebook of Johnson removing the bees writing in a caption "These bees just decided to take a break in this lady's car while she was at our store shopping."

LCFD says an estimated 15,000 bees were removed and relocated to Johnson’s property outside city limits.