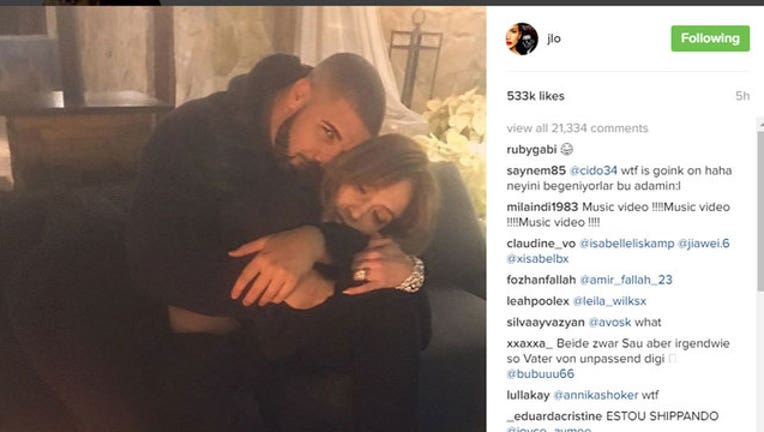 NEW YORK (FOX 5 NY) - On the heels of posting pictures of themselves in a warm embrace, video has surfaced of Drake and Jennifer Lopez getting close at a high school prom-themed party.

Video posted on social media by fan sites of the two stars shows J-Lo giving Drake a quick kiss after the pair was crowned prom king and queen. They can also be seen dancing to what sounds like a possible collaboration between the singer and rapper.

The pair posed for a prom-style photo for the Winter Wonderland Prom. It's not clear where or when the event took place.

Lopez and Drake both posted the same picture of them hugging on a couch on Instagram on Tuesday.

The videos and photos have prompted internet speculation of a duet or romance between the two.

The rumor mill has been turning about an alleged romantic relationship between the pair after Drake attended two of Lopez's concerts in Las Vegas last month, on back to back days. They've also been photographed leaving a late night party together.

There's also Lopez's late cancellation of a performance on New Year's Eve in Miami.  She reportedly will be spending the night in Las Vegas with Drake who is scheduled to take the stage at Hakkasan, according to Page Six.

“He will be in Vegas and she wants to hang out with him,” a source told the website.

Drake also apparently split from on-again, off-again girlfriend Rihanna in recent months after supporting her throughout her Anti world tour this year.