What comes next after Taliban take over of Afghanistan?

Rutgers University Associate Professor of Political Sciences Dr. Wojtek Wolfe joins FOX 29 News at 6 to discuss what comes next as the Taliban seize control of Afghanistan.

WASHINGTON - U.S. officials say they are taking steps to secure Kabul’s international airport to enable the safe departure of thousands of U.S. and allied personnel from Afghanistan by way of civilian and military flights.

In a joint statement Sunday night, the State Department and the Pentagon say the U.S. security presence will have expanded to nearly 6,000 troops over the next two days. Those forces will take over air traffic control and focus on civilian and military departures.

The officials say those leaving include American citizens who have been living in Afghanistan, locally employed staff of the U.S. mission in Kabul and their families, and other particularly vulnerable Afghan nationals.

Also part of the departure plan are thousands of Afghans eligible for U.S. special immigrant visas. Nearly 2,000 of those with special visas have arrived in the United States over the past two weeks.

A State Department official tells The Associated Press that almost all U.S. Embassy personnel have relocated to a facility at the Hamid Karzai International Airport. 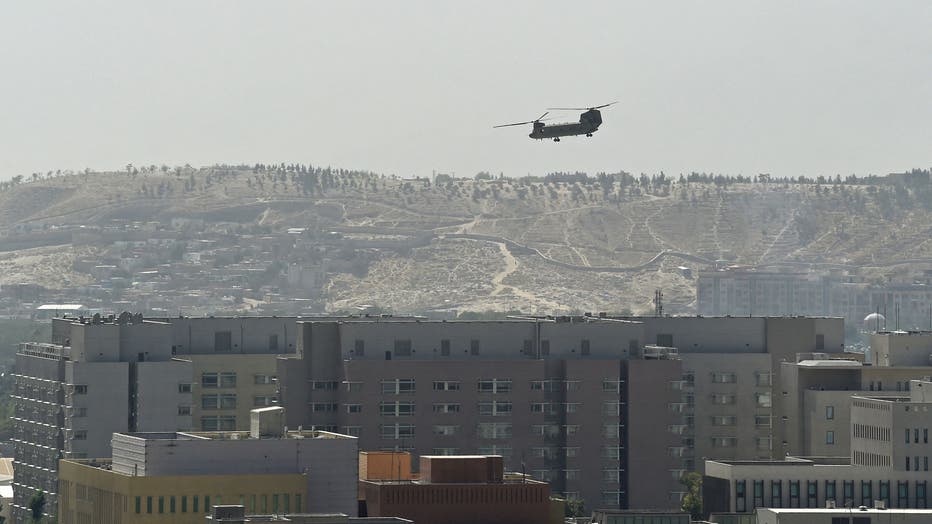 TOPSHOT - A US military helicopter is pictured flying above the US embassy in Kabul on August 15, 2021. (Photo by Wakil KOHSAR / AFP) (Photo by WAKIL KOHSAR/AFP via Getty Images)

Dozens of nations from around the world are calling on all involved in events in Afghanistan to respect and facilitate the departure of foreign nationals and Afghans who wish to leave the country.

More than 60 nations released a joint statement Sunday night citing what they call "the deteriorating security situation" in Afghanistan. The statement says that those in power and authority across the country "bear responsibility — and accountability — for the protection of human life and property, and for the immediate restoration of security and civil order."

The nations' statement also says that roads, airports and border crossings must remain open, and that calm must be maintained.

The statement concludes: "The Afghan people deserve to live in safety, security and dignity. We in the international community stand ready to assist them."

The statement was distributed to U.S. media by the State Department.