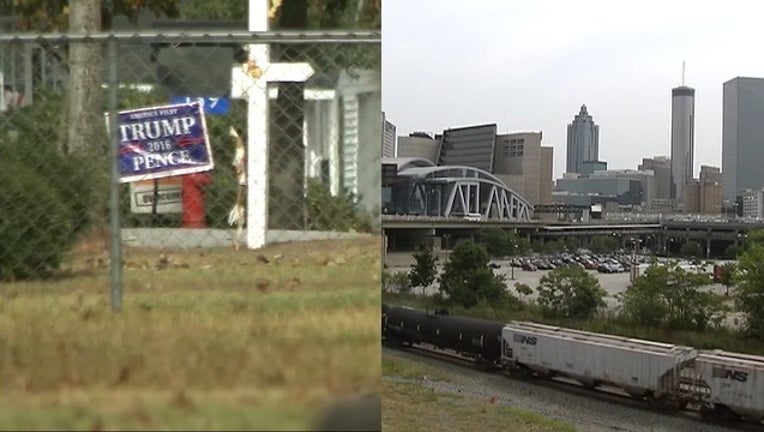 LULA, Ga. (AP) - Patti Thomas owns a flower shop in the north Georgia town of Lula. Xavier Bryant runs an independent pharmacy just outside Atlanta. Looking toward the inauguration of an entrepreneur as president, the two share this expectation: Donald Trump will be good for business.

"He's already proven he can turn things around," the 52-year-old Thomas says, crediting Trump with Ford Motor Co.'s recent announcement that it would scrap a planned Mexico plant while expanding in Michigan. "Just his business enthusiasm, we've been lacking that."

"My intuition," the 33-year-old Bryant agrees, "is telling me that small business owners will win" in Trump's economy.

But beyond that commonality, Thomas and Bryant - a white baby boomer from a tiny town and a black millennial from the big city - illuminate widening cultural fissures that help explain Trump's rise and may well define his presidency.

Trump draws his strength from places like Lula, a railroad town with 2,800 residents and no stoplight in the central business district. He won almost 3 out of 4 votes cast in surrounding Hall County, which abuts the multi-county cluster that makes up metro Atlanta. Even with a growing Hispanic population, Hall is whiter than Georgia and the United States as a whole, and conservatism carries the day.

"This is Trump country up here," explains Margaret Luther, who works in Thomas' flower shop, festooned with fresh and artificial flowers, crosses for religious arrangements and a conspicuous wreath celebrating the University of Georgia Bulldogs.

Bryant, meanwhile, hails from DeKalb County, a Democratic stronghold next to downtown Atlanta. Hillary Clinton won 4 out of 5 DeKalb votes, capitalizing on a large African-American population, a burgeoning Hispanic community and white liberals, many of them from elsewhere.

The dynamics at play in these two Georgia settings, just a short interstate drive apart, match national trends that helped give Trump his victory. According to an Associated Press count, Clinton won just 487 counties across the U.S., most of them urban, while Trump carried 2,626, mostly suburban and rural.

Conversations in Hall and DeKalb counties quickly reveal some of the sharp distinctions between the disparate Americas Trump will lead, even if some are exaggerated by perceptions each side has about the other.

In Hall County, Joe Thomas, Patti's husband, praises Trump as a "non-politician" who doesn't have to answer to establishment players. Patti Thomas says that style spoke to non-urban dwellers who see a nation increasingly dominated and defined by cities. The fact that Trump himself is from New York City doesn't matter, her husband adds, because of his "force of personality."

But at a graffiti- and mural-covered hipster coffee shop in East Atlanta, 37-year-old Jessica Greene counters that what people like the Thomases see as refreshing moxie amounts to "egomaniacal ... control issues" that leave her leery and "in a very dark place about it all."

She adds that, even if it "makes me sound like a jerk," she sees Trump's base outside urban confines as reactionary and ill-informed, driven by religious and social beliefs that can amount to bigotry, intended or not. Greene, a stay-at-home mother, and Bryant, the pharmacist, both pointed to their own faiths as justification for their more liberal views.

In Lula, "most Christian-based homes were for Trump," says 33-year-old waitress Ashley Chandler, but neither she nor those at the Thomases' flower shop bring up their faith or hot-button social issues like abortion or same-sex marriage until asked.

Back in East Atlanta, 36-year-old Kenneth Bota faults that depiction of urban life as part of Trump's "false narrative" about African-Americans. Over the weekend, Trump took to Twitter to blast Atlanta, specifically the district of Rep. John Lewis, who had called him an "illegitimate president." Trump said the district was "in horrible shape and falling apart (not to the mention crime infested)."

Rather than "dividing our communities," Bota says Trump and his supporters should see places like Atlanta and DeKalb County as "different religions and cultures (living) as neighbors."

If there is any real agreement across the gulf between Hall and DeKalb, it is perhaps that Trump is but one citizen, however powerful.

"They all make promises to get elected," says Chandler, the Lula waitress, explaining that her measure for Trump's success is modest: "Maybe he can make it less of a struggle" for people like her.

In DeKalb, Xavier Bryant says he'll embrace Inauguration Day as a reminder of what he can do himself - including "give off more good energy."

He adds: "It's all the small parts that make the whole."