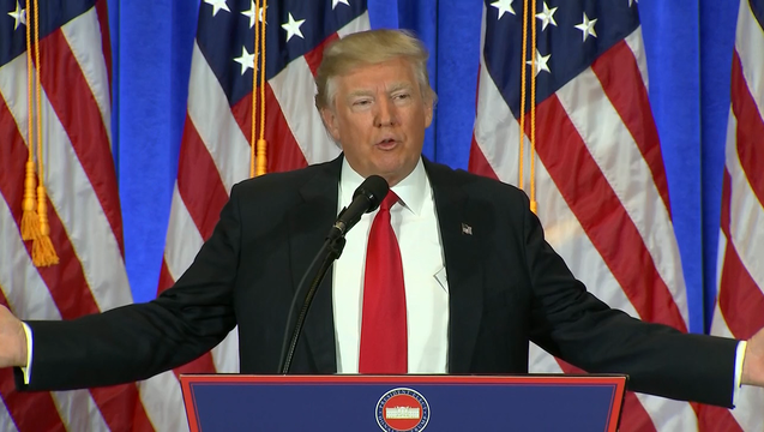 LINCOLN, Neb. (AP) - A block from Nebraska's Capitol, with its unique one-chamber, nonpartisan Legislature, is the lobbying office of Bill Mueller and Kim Robak, who embody the make-it-work spirit of this city: They're husband and wife, Republican and Democrat.

And though neither was a Donald Trump booster, they are trying to remain positive about his presidency and even hope it might make hyperpartisan Washington, D.C., a bit more like Lincoln.

"Wouldn't it be cool if it could actually work?" says Robak, with a trace of the peppy small-town girl she once was before rising through the political ranks to serve as her state's lieutenant governor. "I'm not holding my breath, but if we could actually break the gridlock? That's what the voters want."

"It's not starting off in that direction," says her less-optimistic-sounding husband, as Republicans in Congress gear up to repeal the Affordable Care Act. "You should have listened to MSNBC this morning. It's white and black, good and bad, God and the devil - and if you're in the other party, you're the devil."

Lancaster County, home to Lincoln as well as the politically diverse Mueller-Robak family, is among the most evenly split on political lines of any major county in the nation. Hillary Clinton won here by only 310 votes out of 132,569 cast.

And yet, in the polarized America that Donald Trump takes the helm of, this place has somehow risen above the divisiveness, or at least learned how to live peacefully in opposition. Democrats and Republicans reside amiably side-by-side in farmhouses on gravel roads, old brick buildings converted to condos in the city center, or subdivisions of prairie-style houses in between.

They speak cautiously about their expectations for the Trump administration. Maybe it's their low-key Midwestern attitude, or that people are simply exhausted after the grueling campaign of 2016.

"A lot of the quiet is because no one is exactly sure what's going to happen," says Ari Kohen, a political science professor at the University of Nebraska, Lincoln, who contrasts the ideological diversity of his students with the blanket liberalism of those he taught on the East Coast. "People keep asking me what's going to happen, and I keep telling them no one knows."

"We'll find out pretty soon if it's going to work or not," says Eddie Kramer, 29, before tucking into eggs and hash browns with his wife, Abby, at a firehouse-themed cafe in town.

If it works, the Kramers, who both work for insurance companies and voted for Trump, hope their health insurance bills shrink. The monthly premiums for them and their two children increased about $50 last year, and they had to pay $80 for required medications after their 7-year-old's tonsils were removed.

Still, they've tried to keep the Trump talk down since Election Day.

"We have a lot of friends on both sides," Abby Kramer says. "We try to keep our opinions to ourselves because we don't want to offend anyone."

With its population of 277,000, Lincoln is a big city for Austin Wendt, a computer science major at the university. He's from the agricultural town of Columbus, Nebraska, 78 miles to the north. "It would be an understatement to say I was raised Republican," he says.

On Election Day, Wendt watched the returns with friends, some Trump supporters, some Clinton supporters. He expected to have a nice drink while watching his candidate, Trump, lose. Instead, his Clinton friends melted down.

Wendt wants Trump to follow through on his promise to stop illegal immigration to help Americans reclaim jobs he believes have been taken by immigrants. "We have these laws in place and they're not being carried out," he says.

But he's conflicted: One of his closest friends at the university is a student from Brazil who's gotten a job with Microsoft but fears losing his work visa if Trump follows through on his campaign promises. Wendt himself has a programming job lined up after he graduates this spring.

Across town, Suliman Bandas teaches English as a Second Language, his students immigrants and refugees from Iraq who say they feel safe in a town that, so far, tolerates difference. But Bandas, a refugee from the Sudan, worries about America's reputation as "a country of refuge, a country of protection" under Trump.

"It should not be up to a president to change a country's value and principle," he says.

Vincent Powers is also looking ahead warily. The outgoing chairman of the Nebraska Democratic Party, he thinks "it's going to be worse than anyone imagines." He's not worried for himself; he's a successful plaintiff's attorney and expects to benefit from Trump's proposed tax cuts tilted toward the wealthy. He is concerned for immigrants and those who depend on the Affordable Care Act or government aid.

But Powers finds solace in his hometown and his friends and neighbors, many of whom voted for Trump. "The thing about Nebraska is, we don't have mountains, we don't have any oceans. All we have is people," he says.

"We have a great quality of life, and I'm not going to let politics sap the way I approach life."