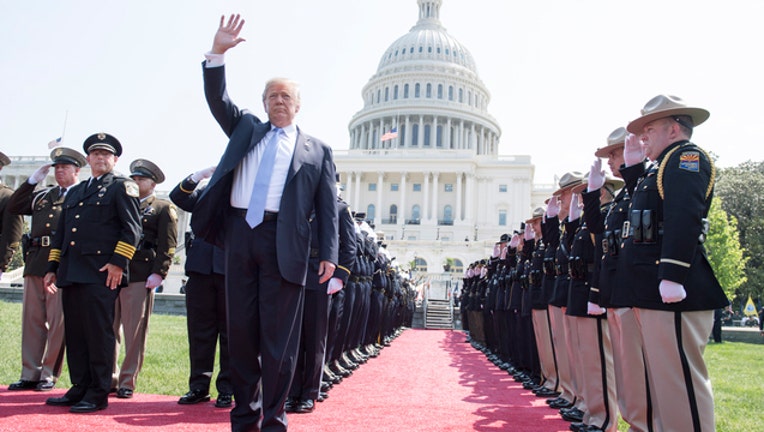 US President Donald Trump waves as he arrives at the 37th Annual National Peace Officers' Memorial Service at the U.S. Capitol Building on May 15, 2018 in Washington, D.C. (Photo by Kevin Dietsch-Pool/Getty Images)

WASHINGTON (AP) — President Donald Trump paid emotional tribute Tuesday to fallen law enforcement officers and the loved ones who carry on without them, saying those who wore the uniform "were among the bravest Americans to ever live."

"They made the ultimate sacrifice so that we could live in safety and in peace," Trump said.

Trump, who likes to project an image of strength and has been criticized for failing to bring the nation together at times of tragedy, made a rare showing of public empathy as he shared the stories of some of the families gathered in the crowd.

Near the end of his speech, he invited onstage the elderly mother and other loved ones of a slain police officer from his native New York City. Officer Miosotis Familia, a mother of three, was killed in July 2017 after being shot in the head by a man who fired into a parked police vehicle in the Bronx. The gunman was later fatally shot by police.

"I'd like to have this family," he said, as he urged them to join him.

Trump joked that he had promised not to reveal the age of Familia's mother, Adrianna Valoy, but that she climbed the stairs better than he did. Trump turns 72 next month.

"So I promised that I wouldn't tell you that she's 90 years old, but, you know what, she is really something, right?" he told the audience. "You look like 55 maybe, 55. Boy, I'll tell you what. You got up those stairs better than I did."

After inviting Familia's police partner to say a few words, Trump told her children how proud their mother was of them.

The president, who made law and order a centerpiece of his presidential campaign, also used the yearly tribute at an outdoor memorial near the Capitol to press Congress to prioritize border security. He said that includes ending policies that allow individuals he described as "violent criminals" back onto the streets.

Trump issued the plea after speaking about Border Patrol agent Rogelio Martinez, who died last year from injuries suffered while he and his partner were responding to reports of unknown activity near a border town southeast of El Paso, Texas.

Trump said government's first duty is to protect its people and that the Department of Homeland Security, which includes the Border Patrol agency, is "on the front lines of this incredible, heroic fight."

"That is why we are calling on Congress to secure our borders, support our border agents, stop sanctuary cities and shut down policies that release violent criminals back into our communities," he said. "We don't want it any longer. We've had it. Enough is enough."