President Donald Trump is asking the Supreme Court to block a subpoena for his tax returns, in a test of the president’s ability to defy investigations.

WASHINGTON (AP) - President Donald Trump is asking the Supreme Court to block a subpoena for his tax returns, in a test of the president’s ability to defy investigations.

The filing Thursday sets the stage for a high court showdown over the tax returns Trump has refused to release, unlike every other modern president. The justices also could weigh in more broadly on Trump’s claim that sitting presidents can’t be prosecuted or investigated for crimes.

The subpoena from the Manhattan district attorney is seeking Trump’s tax returns back to 2011 from his accounting firm as part of a criminal investigation.

Trump wants the court to decide the case by late June, under a deal to keep the district attorney from enforcing the subpoena in the meantime. The justices may not decide whether to hear the case for at least another month.

A second, similar case is headed to the court over a House committee subpoena demanding Trump’s financial records from the same accounting firm. The president has lost both cases at each step of the judicial system so far.

The Mazars USA firm has said it will comply with the subpoenas, if courts agree.

Trump is asking for the Supreme Court’s intervention as the impeachment drama plays out elsewhere in Washington. Public impeachment hearings that began Wednesday are examining claims that Trump tried to get Ukraine's leader to investigate political rival Joe Biden.

If the House votes to impeach the president, Chief Justice John Roberts would preside at a Senate trial that is likely to begin in January.

The justices usually fill their term’s calendar by late January. 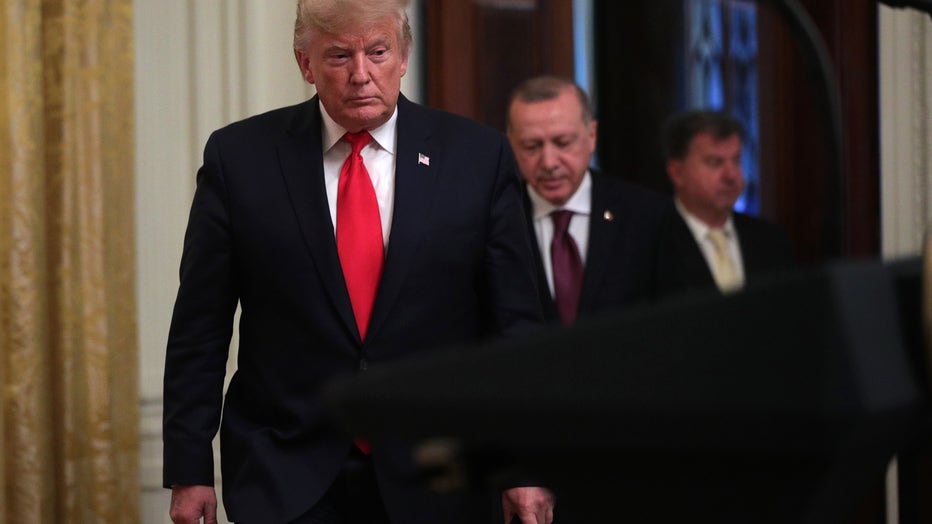 The New York tax case is moving unusually swiftly through the federal courts. A three-judge panel of the 2nd U.S. Circuit Court of Appeals in New York ruled last week that the tax returns can be turned over to New York prosecutors.

The appellate judges emphasized the narrowness of their ruling, deciding only that a state prosecutor can demand Trump's personal financial records from a third party while the president is in office.

The subpoena does “not implicate, in any way, the performance of his official duties," 2nd Circuit Chief Judge Robert A. Katzmann wrote.

During arguments in a New York courtroom, Trump's lawyer told the 2nd Circuit that Trump is immune from state criminal law, even if he shoots someone, because he's president. The exchange stemmed from Trump’s campaign trail comment in 2016 that he "could stand in the middle of Fifth Avenue and shoot somebody, and I wouldn't lose any voters, OK?"

Trump's lawyers have said the probe by Vance, a Democrat, is politically motivated.

The Justice Department, which intervened on Trump’s behalf in New York, has taken a narrower approach, saying Vance must prove "particularized need" for the records before they are released to a grand jury.

In the Washington case, the House Committee on Oversight and Reform subpoenaed records from Mazars in April. They include documents from 2011 to 2018 that the House wants for investigation into the president's reporting of his finances and potential conflicts of interest. The list of documents makes no mention of Trump's tax returns.

The full U.S. Court of Appeals for the District of Columbia Circuit voted Wednesday not to reconsider an earlier panel opinion ordering Mazars to comply with the subpoena.

Trump’s two appointees to the Washington court said the full court should have reheard the case. Judge Greg Katsas called the subpoena a “threat to presidential autonomy and independence.”

There are two Trump appointees on the nine-member Supreme Court, Justices Neil Gorsuch and Brett Kavanaugh.