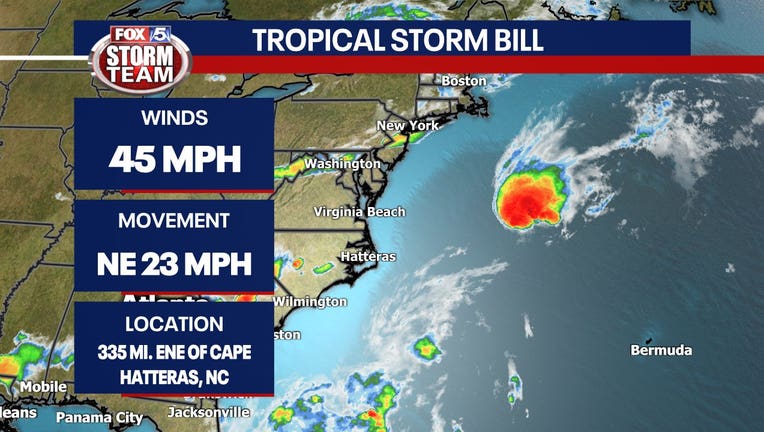 ATLANTA - The Atlantic Hurricane Season has its second named storm. Tropical Storm Bill formed off the coast of North Carolina late Monday evening but is expected to be short-lived.

As of 11 p.m. Monday, Bill was located about 335 miles east-northeast of Cape Hatteras, North Carolina.

According to data from the National Hurricane Center, Bill's sustained winds were at 45 mph. Those tropical storm winds extend about 70 miles from its center.

The tropical storm was moving northeast at 23 mph. The fast-moving storm is forecasted to pick up speed overnight.

There were no coastal warnings or watches in place and Bill is not expected to impact the U.S.

Bill could strengthen slightly overnight but is expected to become a post-tropical low and dissipate by Wednesday.

The storm is not expected to directly impact the weather in Georgia.

Meteorologists are also keeping an eye out for two low-pressure systems, one over the Bay of Campeche and one located several hundred miles west of Cape Verde. Both have less than a 20 percent chance of development in the next 48 hours.