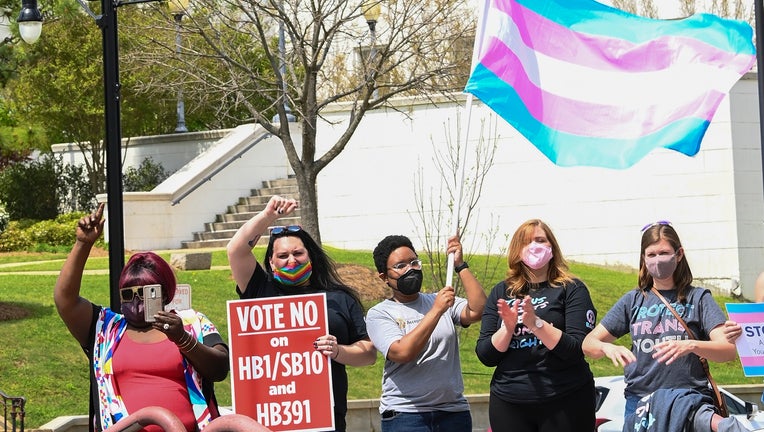 Opponents of several bills targeting transgender youth attend a rally at the Alabama State House to draw attention to anti-transgender legislation introduced in Alabama on March 30, 2021 in Montgomery, Alabama. There are so far 192 anti-LGBTQ bills u

BIRMINGHAM, Ala. - Dr. Hussein Abdul-Latif spent the last week typing out prescription refills for his young transgender patients, trying to make sure they had access to their medications for a few months before Alabama made it illegal for him to prescribe them.

He also answered questions from anxious patients and their parents: What will happen to me if I suddenly have to stop taking testosterone? Should we go out of state for care?

A new state law that took effect Sunday makes it a felony, punishable by up to 10 years in prison, for doctors to prescribe puberty blockers and hormones to trans people under age 19. A judge has not yet ruled on a request to block the state from enforcing the law.

The measure is part of a wave of legislation in Republican-controlled states focused on LGBTQ youth. Bills have been introduced to limit discussion of gender and sexual identity issues in younger grades or to prohibit kids from using school restrooms or playing on sports teams that don’t align with their sex at birth.

Abdul-Latif, a pediatric endocrinologist and co-founder of a clinic in Birmingham to treat children with gender dysphoria, said he is very discouraged by the Alabama law. He said it was already hard enough for families in this very conservative state to come to terms themselves with their children’s situations. They had already faced the social stigma and "the difficult decision of leaving their church family or being viewed less worthy," he said.

But gradually, he said, trans kids became more visible and there was a greater openness in the state for them to come out.

"They always existed, but they often did not have the feeling of empowerment to come out, or come out to their physicians," he said. "And now that they are, we’re hitting them back with legal action."

Abdul-Latif notes that the American Academy of Pediatrics and the Pediatric Endocrine Society both endorse the treatments that clinics here and in other states are providing for transgender youth.

In contrast, "The state is not only saying I am criminal for prescribing those medications, but it’s saying that my organization of thousands of physicians, pediatricians and pediatric endocrinologists are maybe partners in that criminal enterprise," he said.

Four Alabama families with transgender children have filed a lawsuit challenging the new state law as unconstitutional. The U.S. Department of Justice has joined the suit. A federal judge heard evidence this week on a request to block the state from enforcing the statute while the legal challenge goes forward. More than 20 medical and mental health organizations, including the American Academy of Pediatrics, have also urged the judge to block the law. A decision is expected sometime this week.

Alabama maintains the law is about protecting children. "The science and common sense are on Alabama’s side. We will win this fight to protect our children," Alabama Attorney General Steve Marshall said last week.

Now that the law is in effect, families are wondering if they will have to move out of state and doctors are worried about what will become of their patients.

Abdul-Latif, who is originally from Jordan, and pediatrician Dr. Morissa Ladinsky both moved to Alabama years ago to work as instructors and physicians at the University of Alabama at Birmingham. In 2015, after seeing more families with kids identifying as trans and seeking help for gender-related issues, they decided to found a clinic to treat children with gender dysphoria. They now treat more than 150 young people who are transgender or gender diverse.

Ladinsky, who testified last week as a witness in the lawsuit, told The Associated Press that she felt like she was "walking in a nightmare" when the Alabama Legislature approved the ban. She says the measure is an unprecedented legislative overreach into the decisions of parents and the practice of medicine.

"This is the first time ever that I can remember, at least for pediatricians, that we are literally forced to choose between the Hippocratic Oath we took to ‘do no harm’ and never abandon our patients versus the facing of a potential felony conviction," she said.

Ladinsky quickly agreed to co-found the gender clinic in Birmingham when Abdul-Latif approached her about it. She had moved to the city from a hospital in Cincinnati, Ohio, that had a pediatric gender health team, and was familiar with the treatments.

But that wasn’t all. She also had taken a route to work each morning that brought her by the spot where Ohio transgender teen Leelah Alcorn had stepped in front of an oncoming tractor-trailer in 2014. Leelah left a suicide note that read, "My death needs to mean something. ... Fix society. Please."

Some of the children Abdul-Latif and Ladinsky have treated in the Birmingham clinic came to them after suicide attempts, the doctors said. One patient tried to kill themselves five times, he said. A 2021 survey by the Trevor Project, a nonprofit organization focused on suicide prevention efforts among LGBTQ youth, found that 52% of transgender and nonbinary youth seriously considered suicide in the past year, and 1 in 5 reported attempting suicide.

"In our minds, there is no doubt they saved my daughter’s life," said David Fuller, whose daughter was among the first patients treated in Birmingham.

Jessica Fuller, now 22, was 16 when she first came to the clinic after telling her father that she was trans. "The dysphoria was awful and I was thinking about suicide more often than I wish to talk about," Fuller wrote in an email.

She called the new Alabama law "a waste of time and money."

"It’s terrifying not just for the kids but the doctors and nurses just trying to help kids not kill themselves," she wrote. "Are you gonna arrest him for something so harmless?"

Abdul-Latif said he understands that some people may be skeptical over the medical treatments for transgender kids.

"But to make it into a law and make it into a felony — that is way beyond skepticism," he said, adding that the law "basically closes ... a very important dialogue in the country about what is better and what is best for kids with gender dysphoria."

"I welcome an argument. I welcome skeptical voices. I do not welcome imposing voices that leave no discussion," he said.

David Fuller, a police sergeant in the city of Gadsden, said he’s angry that the law could lead to officers putting handcuffs on the people he calls heroes and credits with saving his child.