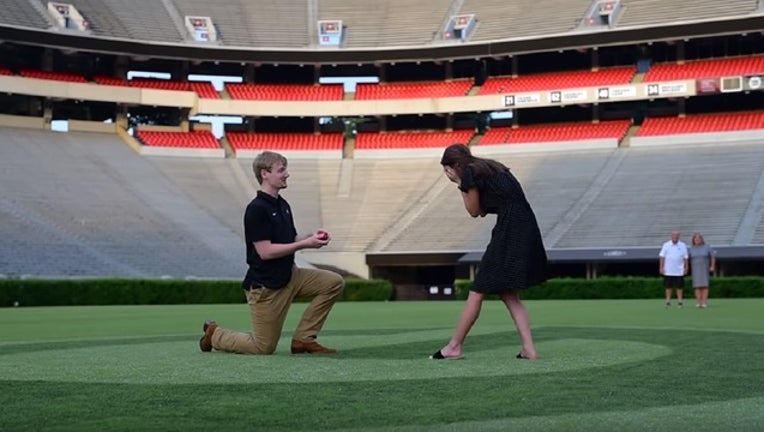 ATHENS, Ga. (FOX 5 Atlanta) - A Georgia Bulldogs couple got engaged in the best possible spot: in the middle of Sanford Stadium.

Clark Gaines, who was a former student video manager for the football team, planned out the whole thing for his high school sweetheart Kaytlin. Gaines said the two had been dating for nearly five and a half years, with him taking videos and photos throughout, knowing he’d one day use them for something special.

Clark had started putting together a video of the couple’s relationship two years ago in his sophomore year. He set the bevy of treasured moments to Eric Church’s “Springsteen” because he said it has the “ability to freeze moments in time” for him.

"It's funny how a melody, sounds like a memory," he wrote in the description quoting a line in the song.

Finally, this month, it was time to show her the video. He took Kaytlin and her family on a “tour” of the Dawgs football home and as she stood over the giant Georgia logo in the center of the field, the video began to play.

Clark posted his own video showing both the video and Kaytlin’s reaction to it to YouTube.

She watches with a curious expression as if she was trying to place the familiar video of a concert, but she also recognized the song and then sees herself. Her face quickly turns into a fully shocked but joy-filled expression. She knows, but it still is all too real.

Still standing on the 50-yard line, her two hands crossed over her mouth, the 36-foot-by-73-foot screen goes black slowly revealing in white lettering "To the love of my life, Kaytlin."

The next 4 minutes and 14 seconds show patches of memories and video sows together representing a comforting quilt which has been their relationship so far. From football games at Franklin High School to trips to Disney World, Universal Studios, and the fair to, of course, going to see Eric Church in concert.

Clark said despite a harmonious handicap, Kaytlin always asks him to sing.

"Although I am musically impaired, and quite frankly cannot carry a tune in a bucket, I still sing this song to her all the time," he wrote.

The final shot of Clark's produced video being shown inside the stadium is of an airplane flying over Ed Bryant Stadium at their high school in Carnesville, where they met.

Clark then joins Kaytlin in the middle of the field in Athens, wraps his arms around him, pulls her close to him, and kisses her as she laughs.

He pulls away as she yells something we can't quite make out at him.

Clark then does something which is rarely ever advised on the 50-yard line of Sanford Stadium unless it’s at the end of a game: he takes a knee. But this isn’t the end. It hopefully is just the beginning.

The actually "popping of the question" can't be heard, but doesn't need to be heard. He opens the ring box, pulls the ring out as she moves closer to him, and despite an obvious nervousness, doesn't fumble as he puts the ring on her finger and stands up as he kisses her.

The scene then cuts to the couple hold hands, showing off her new ring.

Just in case anyone had any doubts, Clark clears up what happened:

“Kaytlin said yes, but not before I struggled getting the ring box open haha. It was a beautiful moment that I will never forget. I cannot wait to continue making memories with Kaytlin. We will travel the world, go to more concerts, see Mickey, have a family, and love God, each other, & others for the rest of our lives.”