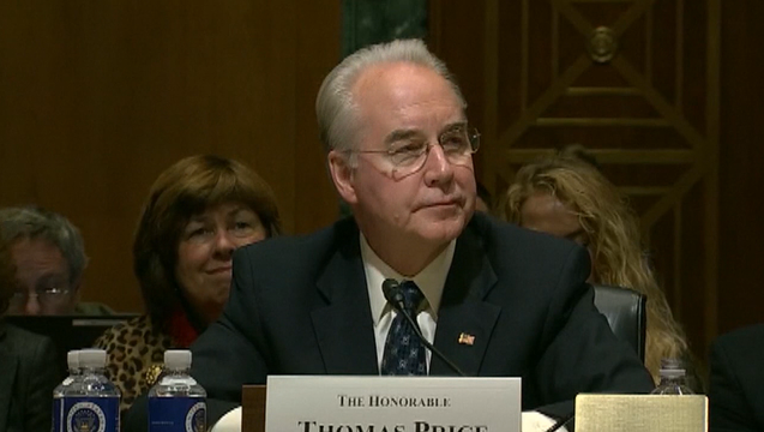 Senators approved Rep. Tom Price, R-Ga., to head the Health and Human Services Department by a strictly party-line 52-47 vote in the dead of night. A debate that Democrats prolonged until nearly 2 a.m. EST Friday was dotted with bitter accusations, reflecting the raw feelings enveloping Washington early in Trump's presidency.

No. 2 Senate GOP leader John Cornyn of Texas said Democrats' "obstruction" of Cabinet nominees was a rejection of Trump's Election Day victory and threatened "the stability of the government and that peaceful transition of power" from President Barack Obama.

Citing Price's long-time support for revamping the Medicare program for the elderly, Senate Minority Leader Chuck Schumer, D-N.Y., said that with Price's confirmation, "The Republicans launch their first assault in their war on seniors." Trump has said he won't cut Medicare.

Republicans see Price, an orthopedic surgeon and seven-term House veteran, as a knowledgeable leader who will help scuttle Obama's health care overhaul, partly by issuing regulations weakening the law. Democrats describe an ideologue with a shady history of trading health care stocks and whose policies will snatch insurance coverage from Americans.

"He seems to have no higher priority than to terminate health coverage for millions of people," said Sen. Jeanne Shaheen, D-N.H. She said his preference for limiting women's access to free birth control was "not only wrong, it's arrogant."

Price's nomination is part of a larger clash in which Republicans want to quickly enact priorities long blocked by Obama. Democrats, with few tools as Congress' minority, are making a show of resistance, stretching some floor debates to the maximum 30 hours Senate rules allow.

Sen. Orrin Hatch, R-Utah, accused Democrats of opposing Trump's nominees with "apocalyptic visions of a future world gone mad." He wondered how Democrats kept "their outrage settings turned to 11 without getting completely exhausted."

Sen. Patty Murray, D-Wash., said Trump was shaping a Cabinet that "benefits those at the top and their allies, but really hurts the workers and families."

Until recently chairman of the House Budget Committee, Price has proposed repealing Obama's health law and replacing it with tax credits, health savings accounts and high-risk pools for sick, costly consumers. Democrats say those ideas are inadequate and would leave people unprotected against significant health expenses.

Republicans have yet to produce a replacement plan and have differed over when they will do so.

Price has supported ending federal payments to Planned Parenthood, and paring Medicaid and giving states more power to shape the health care program for the poor. He'd reshape Medicare's guaranteed health coverage for the elderly into a program offering subsidies for people to buy policies.

Democrats have accused Price of lying about his acquisition of discounted shares of an Australian biotech company and benefiting from insider information. They've also asserted he pushed legislation to help a medical implant maker whose stock he'd purchased.

Price has said he's done nothing wrong. It's illegal for members of Congress to engage in insider trading.

By 53-46, the Senate ended procedural hurdles to financier Steven Mnuchin's nomination to be Treasury secretary. Final approval for Mnuchin and for physician David Shulkin to be veterans affairs secretary was set for Monday.

Sen. Jeff Sessions, R-Ala., became attorney general by 52-47 after Warren was punished for reading a 1986 letter by Coretta Scott King criticizing him. Betsy DeVos was approved as education secretary, rescued by Vice President Mike Pence's tie breaker in a 51-50 vote, and Rex Tillerson won approval 56-43 as secretary of state.

That contrasts with the past four decades, when Senate records show most Cabinet selections have been approved overwhelmingly.

During that period, no secretary of state nominee received fewer than 85 votes. The closest tally for health secretary was the 65-31 roll call for Obama's 2009 pick, Kathleen Sibelius.

Just four of 31 votes for Obama Cabinet vacancies drew at least 40 "no" votes, as did only two of 34 votes for Cabinet positions under President George W. Bush.