LOS ANGELES - One California man is using the power of social media to help others.

Jesus Morales, also known as Juixxe, has been using his million plus followers on TikTok to raise money for street vendors. He has been handing out cash to hard working street vendors in the Los Angeles area. He says he started doing this after seeing videos of street vendors getting attacked.

"Ever since I can remember, I liked giving back when I see someone in need or someone struggling I always felt something in my heart," Morales told FOX 11’s Susan Hirasuna.

In August of 2020 he was furloughed from his job at the gym so he opened a TikTok account. Nothing ground shaking initially, but then things started picking up.

"The first donation was $100, that one actually came from my pocket in hopes of just posting it on TikTok and hopefully inspire others to donate or do something bigger," he added.

The 24-year-old San Diego man hands out cash about two to three times a week, mostly in the LA area.

"If I have a donation in hand and I’m driving around and see a vendor, kind of just get a feeling and pull over and make the donation. It’s very random. 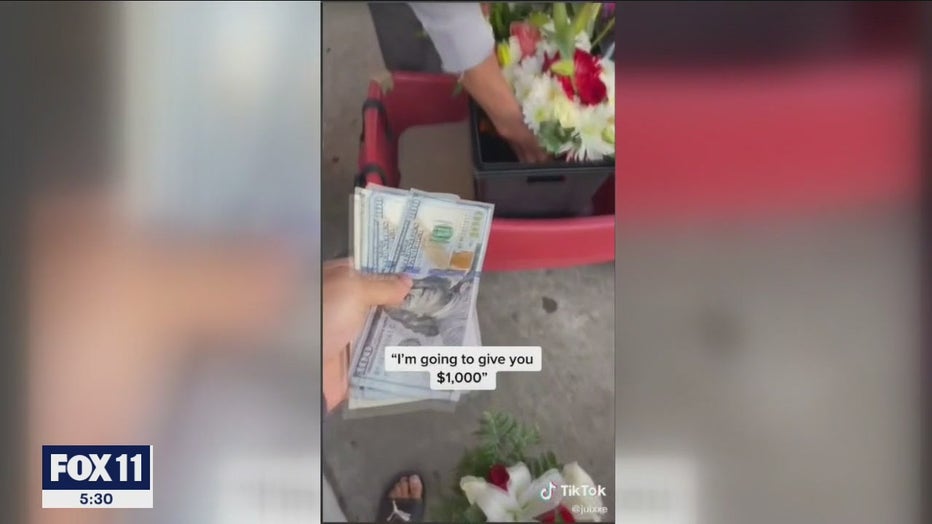 His motivation to help street vendors comes from his parent’s story.

"My parents came here with nothing. They were literally sleeping on cardboard on a basement floor when they first came to this country. They worked hard, worked many different jobs to maintain a roof over our head," he stated.

His largest gift was to a vendor selling corn in the Inland Empire. A video of the elotero being harassed went viral and soon after that Jesus raised $20,000 to help him.

"I don’t want people to glorify me in any way shape or form, honesty, it’s all powered through the community. It’s not me it’s a bunch of angels that come together to make this happen."

The recipients are surprised and overwhelmed by his generosity.

Jesus doesn’t want to embarrass the vendor or put them more at risk for theft so he never reveals faces.