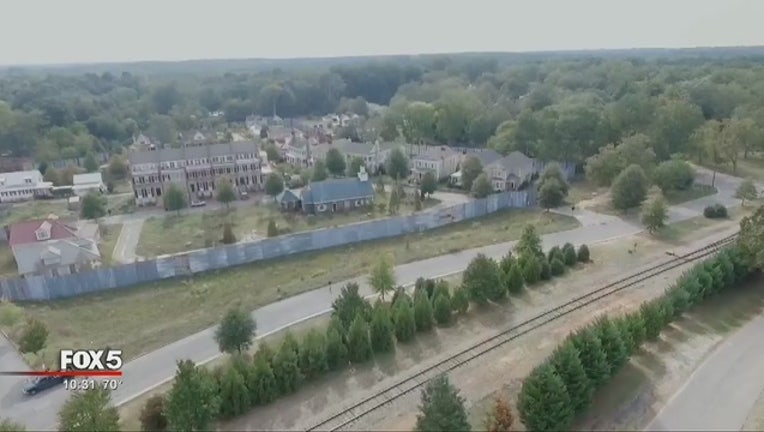 SENOIA, Ga. (AP) - For seven seasons, AMC's "The Walking Dead" has explored a world where the dead roam the earth while the living seek safety - from other humans as much as from the zombies trying to tear into their flesh.

There are characters whose faith is tested but find their grit and fierceness. There are those who are kissups and latch themselves onto leaders, their will to survive stronger than their pride. Then there are those who seize a newfound power to terrorize and bully. Through it all, it's often difficult to discern the difference between who's good and who's evil, something that evolves and can change from moment to moment.

And now, as the show approaches its 100th episode - the kickoff to Season 8 that launches on Oct. 22 - the characters are on the verge of war, a battle pitting character Rick Grimes and his band of loyalists against Negan and the Saviors, mixed in with a few other communities whose allegiances sometimes shift without warning.

For a full day this spring, AMC invited a small group of journalists to the set to talk with the actors and crew involved in the show. Everyone took pains to avoid revealing what was in store in the next season.

The main filming location is on a sprawling lot tucked behind this small south Georgia town where most of this new world has sprouted: Raleigh Studios, a constantly evolving set on 140 acres where all sorts of imaginary communities have been created from scratch.

The Heap - an actual mound of trash filled with all sorts of debris and cars no newer than 2010 (the year the world is said to have died) - was created in just three weeks to serve as the domain for Jadis (played by Pollyanna McIntosh), who speaks in an odd clipped form of English and switches allegiances as fast as character Michonne can lop off a head with her Katana.

The Hilltop, ruled over by drunkard and chauvinist Gregory (played by Xander Berkeley), took nearly four months to create, its 18th century architecture brick exterior concealing an interior that is basically a shell, devoid of any walls. Alexandria, the gated community supposedly in northern Virginia, is an actual subdivision that four real families call home and have to stay clear of the film crews that flock there six months out of the year.

The first season was shot largely in Atlanta. By the second season, Raleigh Studios in Senoia - about an hour south of Atlanta - had been created in this town of about 4,000.

Not only does it allow the show to create and keep the communities that make up "The Walking Dead," but it can be constantly reinvented. The spot where Gabriel's church once stood? It was torn down and became the dirt circle where Season 6 ended with Rick and his crew kneeling before Negan, the spot where beloved characters Glenn and Abraham were slain at the end of Negan's barbed-wire covered bat.

And now? It remains vacant. "This is pretty much hallowed ground," said Tom Luse, the show's executive producer, as he gave a group of journalists a tour of the studio grounds. It was a tough scene to shoot, he said, and it was even tougher to lose not only two beloved characters but two actors among a crew that considers itself tight-knit.

"I don't know if we'll shoot here again," Luse said, adding later: "This is a shrine."

Virtually everything is shot on the site. One exception: The Kingdom, which is shot at Tyler Perry's studios at nearby Fort McPherson.

One of the biggest advantages and challenges? The grass and shrubs. "Greens help hide a million sins," Luse said. But they also have to ensure it doesn't get trimmed or mowed too often. "We have to constantly recreate that dead look."

The show is based on comics created by writer Robert Kirkman and artist Tony Moore. The comics are still going strong with more than 165 issues so far. In some cases, the TV show mirrors how it plays out in the comics; in other instances it veers off on its own course. Even a few characters not seen in the comics find their way on the screen, including Daryl Dixon (played by actor Norman Reedus), a crossbow-wielding character who has proved to be one of the show's most popular.

Gale Anne Hurd, an executive producer, attributes much of the cast's comradery to Andrew Lincoln, who plays lead character Grimes, a sheriff who emerged from a coma to find the zombie apocalypse has turned the world upside down.

"We work and live in a bubble. And it's great that's the case because no one has changed," Hurd said. "That's what is special about this show. Not one person from the (original) cast all of a sudden thinks they're some sort of superstar and has a big trailer or an entourage. They're still in two banger trailers."

When did it start to dawn on them when the show would become a huge success and endure? For Hurd, it was fairly early: Season 2. The characters had escaped to a sprawling farm outside of Atlanta. There was comfort, apparent safety and places nearby to raid for weapons, food and other assorted basics.

"The second season was one in which with people arguably could say OK, it slowed down, they're at the farm, it was focused significantly on character development and the fandom grew," Hurd said. "And in my mind knowing that there was action to come and there were bigger worlds, more worlds, more characters that if we were building viewers in Season 2 that it was the kind of trajectory that made for a show that could endure."

Greg Nicotero, special effects guru who has not only made his mark on the show by creating the zombies who lurch and prowl the world but also is co-executive producer and occasional-director, called this season's premier its most propulsive - a word used repeatedly by the cast and crew as they began taping Season 8.

Season 7 was known for segmented episodes that narrowly focused on one character or community. It was described as a tough season to get through, the actors missing the chance to interact with a variety of colleagues and feeling isolated. Cast and crew say the feel for Season 8 is different. The pace will be accelerated and even the way it's filmed will feel different, though no one would even come close to betraying those nuggets fans crave to divine which characters might die and how the war will play out.

But they do note that there will be moments that pay homage to all the previous seasons - and to their loyal fans.

"There's gonna be some moments that people who have watched the show from the beginning will see and be like, 'Oh, OK, I see what they're doing here' by paying tributes to specific moments over the last seven years," Nicotero said.