It’s been four months since she was last seen. Her family, friends and neighbors are not giving up hope of her return.

Bridgeton, New Jersey police say the five-year-old girl was abducted from a city park in mid-September as she played on the swings with her younger brother. 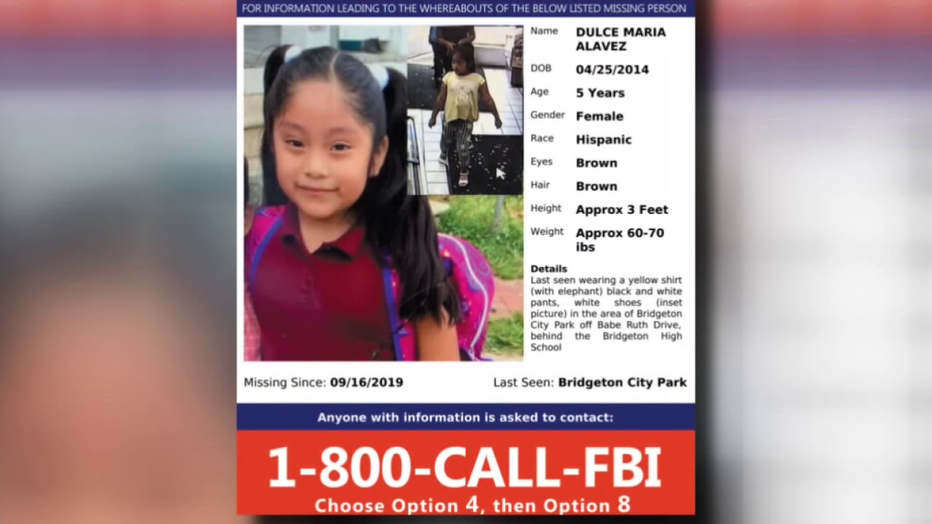 Nearly four months later, Alavez Perez once again finds herself in a wooded section of Bridgeton, surrounded by some people she knows and some strangers, hoping something leads them to her daughter.

“So people can be aware that she’s still missing, that she hasn’t been found,” Alavez Perez stated.

“My main goal is to, hopefully, find someone that may want to say something. A change of heart, you know? You never know,” added volunteer Jackie Rodriguez.

Sunday’s search is one of several organized by Bridgeton mom Rodriguez since Dulce Maria Alavez disappeared on September 16th.

Police say Noema was sitting in her car 30-yards away when they believe Dulce was lured by a man into the back seat of a red van.

In a recent nationally televised interview with Dr. Phil, Rodriguez was outspoken about Noema knowing something.

“I just wasn’t there to backstab her. I was just saying, as a mother, she can be protecting her daughter and may be scared of just saying something,” Rodriguez stated.

Bridgeton Police Chief Michael Gaimari stopped by unannounced after hearing that the group also planned a march for Monday.

Chief Gaimari says they have representatives from the FBI, state and local agencies working daily on Dulce’s case and they have made significant progress. But, like any investigation, they don’t want to make it public.

“Everyone is still in play and we’ve interviewed, I want to say, probably close to 1,000 people in the course of this investigation. Some people we bring in for second interviews and some people we further investigate. We continue to do that,” Chief Gaimari explained.