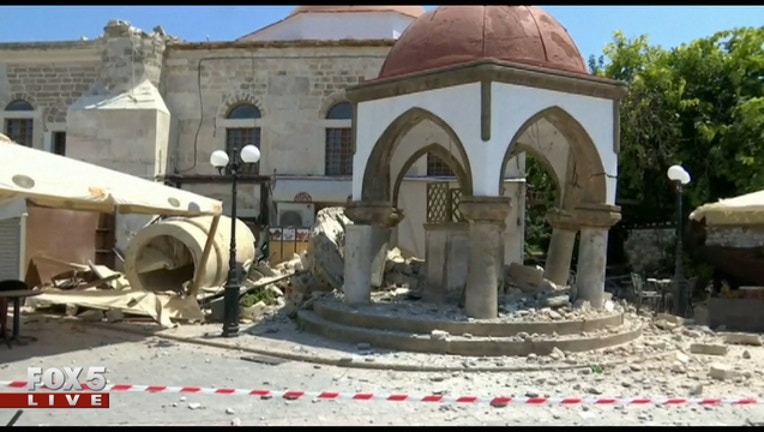 KOS, Greece (AP) - The Latest on an earthquake that struck Turkey's Aegean coast and nearby Greek islands (all times local):

Turkey's Istanbul-based earthquake research center says the powerful quake that hit the Aegean Sea caused a small 'tsunami' at the Turkish resort of Bodrum, where waters surged but damage was limited and appeared only slight.

The Kandilli Observatory' director, Haluk Ozener, told reporters Friday that the tsunami waters swept between 10 and 100 meters (yards) in to the coast.

The Observatory said the quake's magnitude was 6.6. Ozener said it was followed by some 160 aftershocks, the highest measuring 4.8.

Turkish media reports say the powerful 6.5 magnitude earthquake that struck the Aegean coast caused cracks on the walls of some buildings in the resort of Bodrum, flooded the lower floors of sea-front hotels and restaurants and sent moored boats crashing toward the shore.

Tourists and residents spent the night outside on beach loungers or in cars.

Boat captain Metin Kestaneci, 40, told the private Dogan news agency that he was asleep on his vessel when the quake hit.

"There was first a noise and then a roar. Before I could ask 'what's happening?' my boat was dragged toward the shore. We found ourselves on the shore," Kestaneci said. "I've never experienced such a thing."

A local official says about 70 people were treated in hospitals in the Turkish resort of Bodrum for minor injuries after a powerful 6.5 magnitude earthquake sent people rushing to the streets.

Bodrum's district governor Bekir Yilmaz says Friday that most injuries were sustained while people were fleeing their homes in panic, according to private Dogan news agency. There were no fatalities in Turkey.

Speaking in Bodrum, the head of Turkey's disaster and emergency authority says tourists could continue their holidays. Mehmet Halis Biden said, "We expect life in our tourism town to go back to normal in a speedy way," as quoted by Turkey's official Anadolu news agency.

Dogan news agency reported some tourists leaving Bodrum on the first morning flights. One local tourist said he chose to leave because people were not allowed in their hotel rooms.

Greek authorities say two tourists killed in an overnight earthquake on the island of Kos are from Turkey and Sweden.

He said one of the five people seriously injured had been identified as being Greek.

The two tourists died after a wall collapsed onto a bar in the Old Town of the island's main port, he said. The 6.5-magnitude quake struck about 1:30 a.m. Friday.