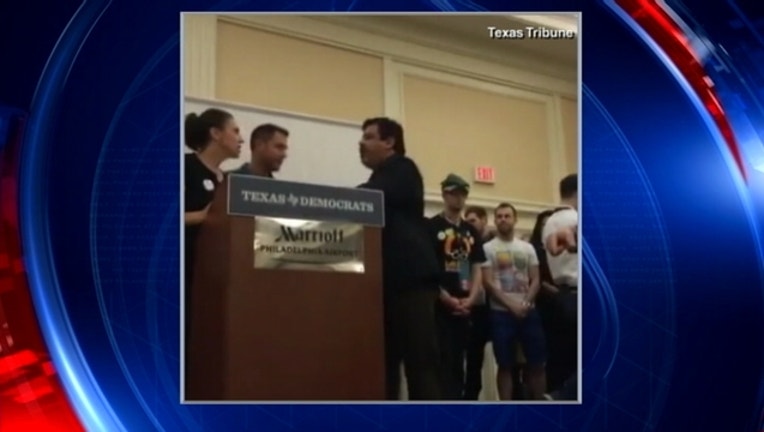 PHILADELPHIA - Bernie Sanders showed his support for Hillary Clinton at the Democratic National Convention, but not all of his supporters are following his lead.

Video posted online by the Texas Tribune shows the scene at Tuesday morning’s Texas Delegates Breakfast in Philadelphia. Sanders supporters got into a shouting match with Hillary’s supporters.

That caused an uproar where some Clinton supporters yelled, "Grow up!" It took several minutes for Clinton delegates to calm things down.

Lytle later released a hand-signed statement saying that in a moment of "passion," he voiced thoughts that did not reflect his intention of "promoting productive dialogue."

Lytle also said he had voluntarily withdrawn his convention credentials -- a largely symbolic move that had little practical effect on his standing as a delegate.

Rafael Anchia, a state lawmaker from Dallas and Clinton superdelegate, shrugged off the chaotic scene as normal for conventions. He expects all this to be forgotten by the end of the week.

"In the end, the old proverb of `the enemy of my enemy is my friend' will prevail," he said.

They were not swayed by his speech at the convention and said he persuaded “no one” to “vote for Hillary.”