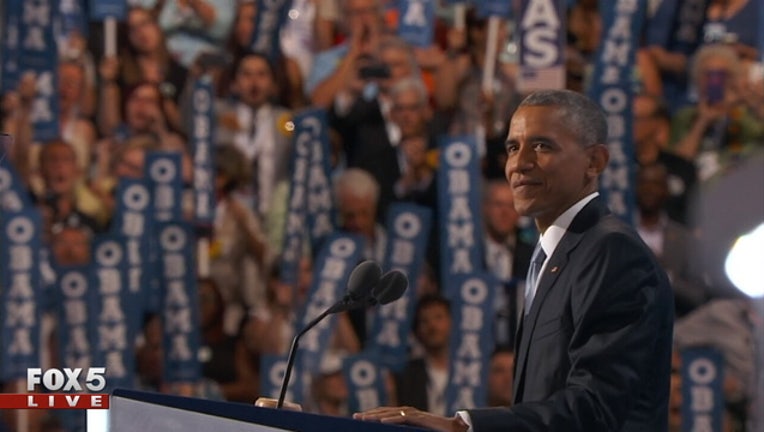 PHILADELPHIA (AP) — President Barack Obama used what is likely his last high-profile speech as president to make a powerful case for Hillary Clinton's election, saying it wasn't even a close choice between her and Donald Trump, whom he described as a homegrown demagogue.

Obama was the biggest of a number of big-name speakers Wednesday, the third day of the Democratic National Convention. Vice President Joe Biden also made an emotional valedictory speech, and Clinton's running mate, Virginia Sen. Tim Kaine, introduced himself to the nation.

All attacked Trump, who generated controversy earlier in the day by encouraging Russia to find and make public emails deleted by Clinton — an extraordinary suggestion that a foreign power meddle in U.S. elections.

Here are the top takeaways from Day Three of the Democratic National Convention:

Obama left no doubt that he was "ready to pass the baton" to Clinton.

He vouched for his former secretary of state's national security credentials, praising her as someone who keeps her cool in a crisis and "never, ever quits." Obama said Clinton is trusted by world leaders and will keep America safe.

Beyond personal ties and party loyalty, a big motivation for Obama's robust support is concern that Trump would unravel his legacy if the Republican wins in November.

Obama painted an optimistic picture of the country that contrasted sharply with the "deeply pessimistic vision" of America presented at last week's GOP convention.

In an implicit attack on Trump, Obama said traditional American values held by his grandparents — such as modesty, honesty and kindness — continue today and that "anyone who threatens our values, whether fascists or communists or jihadists or homegrown demagogues, will always fail in the end."

Kaine looked to build up his nice-guy image, but also take on the traditional vice presidential candidate role of attack dog.

The Virginia senator introduced himself to the many Americans who had never heard of him before he was tapped by Clinton last week. "I never expected to be here," he said.

He went on to ridicule Trump's habit of saying no more than "believe me" when offering vague details of how he'd build a wall on the Mexican border or destroy the Islamic State group "so fast."

ARE YOU LISTENING RUSSIA?

Trump touched off a firestorm with his comments about Russia, even as he dismissed suggestions from Democrats that Moscow was already acting on his behalf.

Responding to reports that Russia may have hacked Democratic party emails, Trump said he hopes Russia will find emails Clinton says she deleted from her years as secretary of state. "Russia, if you're listening, I hope you're able to find the 30,000 emails that are missing," Trump said.

Democrats said the comments were the latest demonstration that Trump is unqualified to be commander in chief.

Biden, who made a wrenching decision not to run for president, fired up delegates with a searing attack on Trump. Biden said Trump "has no clue" about the needs of working-class people or what makes the nation great.

Biden described Trump's claim to care about the middle class as "a bunch of malarkey." Delegates chanted "not a clue, not a clue" and jumped to their feet.

Biden, a loyal Democratic soldier and a popular figure within the party, said Clinton "has always been there for you. It's her life story."

NO LOVE AMONG NEW YORKERS

Former New York Mayor Michael Bloomberg denounced Trump as a "dangerous demagogue" and said his fellow New York billionaire was little more than a con artist with a well-documented record of bankruptcies. "I'm a New Yorker and I know a con when I see one," said Bloomberg, who was first elected as a Republican and now is an independent.

"Trump says he wants to run the nation like he's run his business. God help us," Bloomberg said.