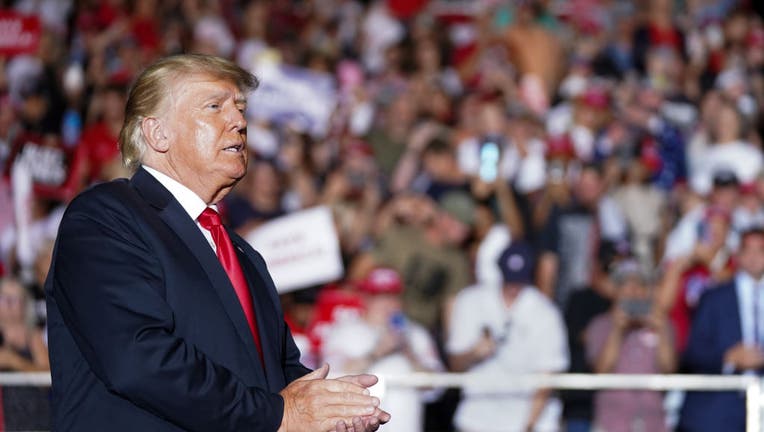 Former President Donald Trump walks off the stage at the end of a rally on September 25, 2021 in Perry, Georgia. (Photo by Sean Rayford/Getty Images)

ATLANTA - Supporters of Republican Georgia Gov. Brian Kemp are fighting back against Donald Trump and their own party leaders, angered by a rally last month in which the former president again attacked the state’s chief executive.

Kemp’s proponents warn that a total embrace of Trump, his false claims about election fraud and his vendetta against the governor for not trying to overturn Trump’s loss in Georgia last year could ruin Republican chances in 2022 in the narrowly divided state.

"Right now we are joined at the hip to Donald Trump, who doesn’t share the same interests," said James Hall, a state Republican Party committee member from Savannah. "He wants to torpedo Brian Kemp."

Georgia is one of several states seeing Trump-driven infighting. The former president also continues to roil the party’s internal politics in Arizona, where he has targeted Republican Gov. Doug Ducey, and Wyoming, where he is driving an effort to oust Liz Cheney, the state’s lone U.S. House member. Trump is endorsing primary candidates across the nation, continuing a drive to remake the Republican Party in his image.

The moment that crystalized Kemp supporters’ discontent was when Trump, repeatedly calling Kemp "a disaster," twice suggested he would prefer Democrat Stacey Abrams as Georgia’s governor. Abrams became a national Democratic superstar even though Kemp edged her out in 2018. Georgia Democrats strongly want her to run again for the governor’s office in 2022.

"Stacey, would you like to take his place? It’s OK with me," Trump said at the rally in Perry, Georgia.

Hall and others fear a replay of the 2021 U.S. Senate runoffs. Democrats Jon Ossoff and Raphael Warnock beat Republicans David Perdue and Kelly Loeffler, delivering control of the U.S. Senate to their party. Turnout in that election fell more in Republican areas than in Democratic ones, and Hall blames Trump’s false fraud narrative, saying it "scares people away from the polls."

Buzz Brockway, a former Republican state representative who lost a primary bid for secretary of state in 2018, agrees. "It’s a suicidal cult. That’s what’s happening," he said. "It’s not hurting the Democrats."

Others think harnessing the energy of right-leaning voters who are "really dissatisfied" with President Joe Biden will be more important in 2022 for the Republican party than distancing itself from Trump’s damaging rhetoric.

"When President Trump says something tongue-in-cheek about Brian Kemp, I don’t think anybody really cares," said Marci McCarthy, who chairs the GOP in the Democrat-dominated Atlanta suburb of DeKalb County. "I think more people are concerned about their everyday living."

Kemp partisans are particularly angry at state Republican Party Chairman David Shafer, who introduced the rally. Critics say Shafer violated party bylaws requiring him to not pick sides in primaries by appearing at an event during which Trump repeated his endorsement of several candidates. The state party also raised money for itself by selling VIP tickets to the rally.

Shafer, who continues to echo Trump’s false fraud claims and call for an additional audit of Georgia’s results, said Monday that it was Trump’s event, not the party’s.

"When we accept a contribution or sponsorship from a Republican candidate to speak at an event, that does not mean we are endorsing the candidate or agreeing with everything the politician says," Shafer wrote in a letter to state committee members after Hall and others complained.

His critics say it was foreseeable that Trump would attack Kemp. But Shafer said he’s focused on recruiting volunteers and raising money to support a unified party after the primary.

"My job is to emphasize the areas of agreement and not the areas of disagreement with other Republicans," Shafer said. "We can’t win divided. We’ve got to pull everyone back together, and that’s what I’m going to do."

With Trump loyalists flooding in at the grassroots and increasingly controlling party machinery, many Kemp supporters are out of power, and it’s unclear if their complaints will get any traction. Days after the rally, the local Republican Party in Cobb County — a onetime GOP stronghold that has swung sharply toward Democrats in recent years — censured Kemp for not doing enough to stop illegal immigration.

"The Cobb Republican Party, when it should be preparing to challenge Democrats, is instead fighting Republicans," said Shepherd, who lost a bid against Shafer this summer to lead the state party.

More than a dozen county Republican parties have censured Kemp on some grounds this year, as did the 7th Congressional District GOP.

The Cobb County Young Republicans released a statement condemning their county party’s move and saying the group would support Kemp.

Although Trump has endorsed Herschel Walker for U.S. Senate, state Sen. Burt Jones for lieutenant governor and U.S. Rep Jody Hice for secretary of state, he hasn’t been able to line up a candidate for governor. Democrat-turned-Republican Vernon Jones spoke at Trump’s rally, but the former president hasn’t given Jones the nod, despite Jones building his campaign around claims that Trump was defrauded in the 2020 election and courting Trump-aligned figures including former New York Mayor Rudy Giuliani and former New York Police Commissioner Bernie Kerik.

Trump supporters over the summer talked up the possible candidacy of the obscure mayor of a small Georgia town. Trump’s PAC later commissioned a poll that showed Perdue could beat Kemp in a Republican primary if Trump endorsed Perdue. The former president added fuel to that fire at his Georgia rally when he pointed out Perdue among a clutch of Republican Party leaders.

"Are you running for governor, David?" Trump asked. "Did I hear he’s running?"

For now, though, Kemp remains the favorite to be the Republican nominee next year — even though it appears equally likely that he will continue to be dogged by Trump. Kemp supporters, at least, are tired of indulging the former president’s taste for revenge.

"We’re giving a huge microphone to a guy who is criticizing our people and that’s how we’re going to slit our throats in 2022," Hall said.