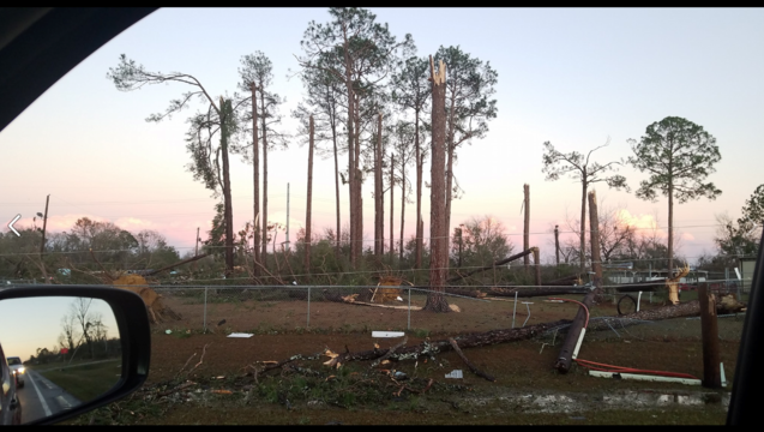 NEW YORK (AP) - From California to the Deep South to the Northeast, millions of Americans were contending with death and destruction from damaging January weather. Flooding, high winds and suspected tornadoes have rousted people from their homes. A deadly storm system tore across the Deep South, a nor'easter lashed the East Coast and rainfall records fell in California.

Some more details on the wild weather:

A powerful storm system that tore across the Deep South over the weekend killed 20 people, including 15 in south Georgia. Rescuers were going through stricken areas Monday, searching for possible survivors.

Patrick Marsh of the Storm Prediction Center in Norman, Oklahoma, said 39 possible tornadoes were reported across the Southeast from early Saturday into Sunday evening.

Marsh said while the risk of tornadoes is strongest in the spring in the central U.S., it "never really goes to zero" for most of the year in the Southeast.

Data from the Storm Prediction Center shows that, over the past decade, the nation has seen an average of 38 tornadoes in January, ranging from a high of 84 in 2008 to just four in 2014.

Millions of people from the mid-Atlantic through New England were being advised to hunker down as a nor'easter moved up the coast.

High wind warnings and advisories were in effect throughout the region. Some wind gusts were expected to approach 60 mph, while offshore winds could reach hurricane levels of 74 mph or higher.

In Philadelphia, police say a man was killed when he was struck at a car lot by a sign knocked off a wall, and panels from a multistory mural blew off another wall and hit two parked cars.

In New Jersey, strong winds blew part of the roof off an oceanfront condo building in Long Branch. Debris fell onto several parked cars below.

In upstate New York and into northern New England, forecasts were calling for possibly as much as six inches of snow and sleet.

California finally got a break Monday from a three-day winter storm that broke rainfall records, washed out roads and churned up tremendous waves. Sunshine and rainbows alternated with thunderclaps, downpours, snow and hail as the last of the storm system broke up.

Further north, an avalanche shut down a highway in the Sierra Nevada mountains, and nearly 3 feet of snow fell on ski resorts. Avalanche warnings were issued for northern Utah. Forecasters predicted up to a foot of snow and winds gusting to near 50 mph.