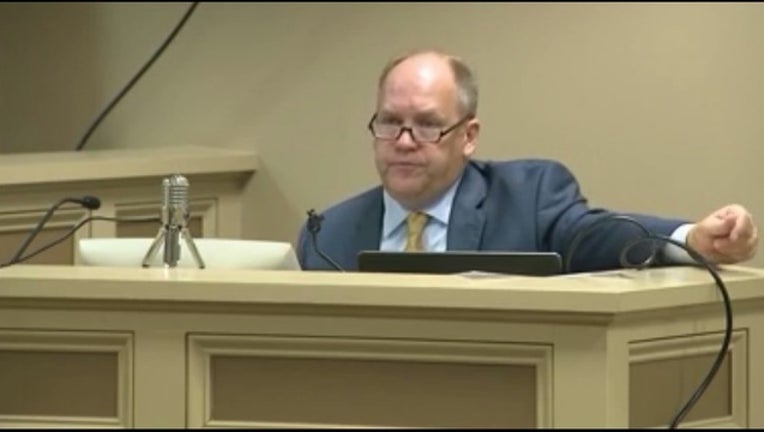 HOMER, Ga. (FOX 5 Atlanta) - Voters will return to the polls for a third time to cast ballots in a controversial Georgia State House race.

On Friday, a judge overturned results in the Georgia House District 28 race and ordered a new election.

The ruling is the second time that the judge has thrown out the results of the hotly contested race between incumbent Banks County State Representative Dan Gasaway and challenger Chris Erwin.

Erwin won the most recent election in December by three votes.

But after a week of arguments by both sides in court, specially-appointed Judge David Sweat ruled at least four voters were illegally cast in the December election and ordered a new one.

The ruling represented another court victory for Gasaway, who lost the first election, appealed, got it overturned, but then lost again in the second election.

FOX 5 Senior I-Team reporter Dale Russell has covered this case for weeks and was in court Monday for Gasaway's latest appeal.

Many came to court to make sure that every vote counted - especially their own vote.

“It upsets me that I voted and it didn't count,” Sandra Denton testified.

“They just threw my vote away and I didn't like it,” Michael Burrell added.

Burrell and Denton were two of the key witnesses in Rep. Gassaway's attempt to get a third shot at winning his state house seat.

He sued the Habersham and Banks County Boards of Elections, claiming at least 21 voters either voted in the wrong race or didn't get to vote in the right race.

“It's not rocket science,” Gasaway’s attorney Jake Evans told the judge, “there has to be accountability, this has to be corrected.”

Back in September, Gasaway and attorney Evans went to court to throw out the first House District 28 election results from May. Gasaway lost the Republican primary by 67 votes to Irwin. There was no Democratic opponent.

Using the county's own elections official's testimony and detailed sophisticated mapping, attorney Evans convinced the judge at least 70 people voted in the wrong districts – enough to potentially change the results.

“It's going to be necessary to conduct a new election,” specially appointed Judge David Sweat said at the time.

Sweat ordered a new election. But Gasaway lost again. This time by two votes. And once again, he challenged the results, arguing in court at least 21 people's votes were wrong.

Banks and Habersham counties' lawyer, Bryan Tyson, told the judge during his opening statement that there is a process in the law that allows for people to move out of district and still vote there.

Tyson also said at most, Gasaway had only one improper vote.

High school principal Carrie Akers admitted in court that she had moved out of the Gasaway house district long before the election, but voted in the election anyway.

The most controversial allegation made during the legal challenge was that Banks county Sheriff Carlton Speed was ineligible to vote, because he really lives on the other side of the Banks county line - in Franklin County.

“My residence was called into question several years ago and it was decided in court,” he told the FOX 5 I-Team.

Tyson told the judge it is not as simple as Gasaway argued. He introduced evidence that the law allows for a process where who moved outside of Gasaway's district can to still legally vote there.

In his ruling, Sweat wrote, “In sum total, the evidence has shown that there were at least four voters who were improperly permitted to vote in this election. The Court understands that the margin of difference between candidates was two votes.”

But Sweat also found that Speed and two members of his family “were properly allowed to vote.”