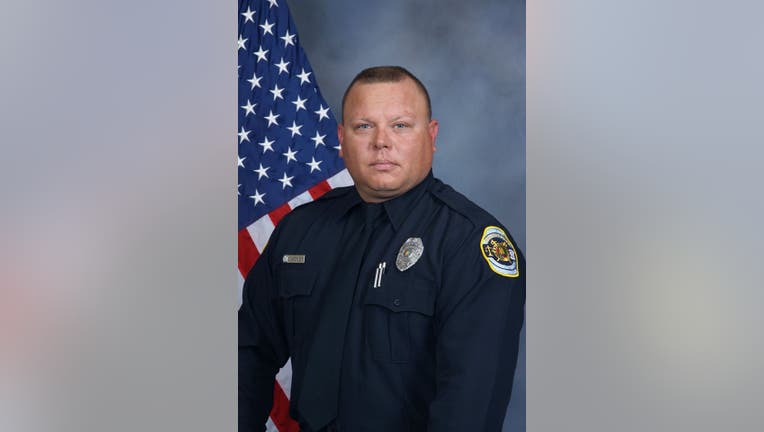 HUNTSVILLE, Ala. - Authorities on Saturday identified an Alabama police officer who was killed during a drug enforcement operation and said the man's father was also an officer with the Huntsville Police Department who died in the line of duty.

Billy Clardy was shot in the heart Friday during a drug buy set up by authorities at a residence where they expected a suspect to drop off a large amount of drugs, Huntsville police said.

The suspect immediately shot Clardy on the porch and was captured after a short foot chase, authorities said. Police identified the suspect as LaJeromeny Brown, 41, from Tennessee, news outlets reported. It was not immediately clear whether Brown had an attorney.

Police have said Clardy was wearing a bulletproof vest when he was shot.

Police Chief Mark McMurray said at a news conference on Saturday that Clardy joined the Huntsville police force in 2005 after serving in the military and as a law enforcement officer in other agencies. He had served as a community resource officer in Huntsville — a role in which he worked closely with the city's homeless population.

“Billy Clardy was more than a Huntsville hero,” McMurray said. “He was an American hero.”

Clardy is survived by a wife and five children, according to the police chief.

McMurray said Clardy's father was also a Huntsville police officer. The father, Billy Clardy Jr., died in a crash while on duty in 1978, AL.com reported.

McMurray was flanked by wreaths and surrounded by other officers.

“And I stand up here and tell you right now, Billy Clardy would do it all over again right now," he said. “I know he would."

Six Alabama law enforcement officers have been killed in the line of duty in 2019, according to numbers released by the Alabama attorney general's office following last month's fatal shooting of Lowndes County Sheriff John Williams.