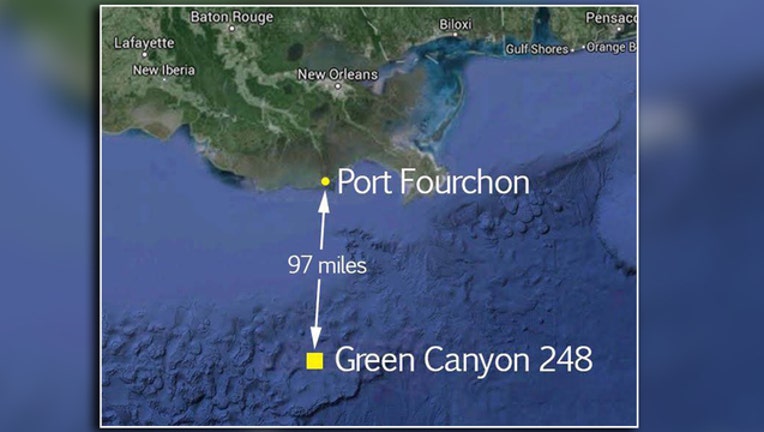 NEW ORLEANS (AP) - Crews were preparing to clean up an oil spill in the Gulf of Mexico after about 88,200 gallons of oil were released from a Shell flow line about 90 miles off the coast of Louisiana, the company said Friday.

Shell said five boats were dispatched to clean up oil they can skim off the surface of the Gulf.

Meanwhile, environmental groups said this latest spill was another example of why offshore drilling should be banned. Activists plan to hold a march in Washington, D.C., on Sunday to demand an end to drilling and used this new spill as further evidence.

"It's unacceptable that oil spills have been permitted to become the status quo in the Gulf," said Michael Brune, the Sierra Club's executive director, in a statement. "We have allowed the region to be perpetually treated as a sacrifice zone."

Shell did not directly respond to the complaints of environmental groups. In a statement, Kimberly Windon, a Shell spokeswoman, said, "No release is acceptable, and safety remains our priority as we respond to this incident."

Spills happen every year in the Gulf. This new spill is classified as medium in size under U.S. Coast Guard guidelines.

Since 2012, there have been 147 spills and about 516,900 gallons of oil spilled in the Gulf, according to figures from the Bureau of Safety and Environmental Enforcement, the agency that oversees drilling.

But scrutiny of the offshore industry's spills has increased since BP's catastrophic oil spill in 2010 when an out-of-control well leaked for 87 days, releasing millions of gallons of oil. Eleven workers were killed and many more injured when the blowout of the well caused the Deepwater Horizon drilling rig to explode and sink.

On Friday, Shell said it sent a remotely operated vehicle down to the seafloor to inspect where the leak came from and found a flow line as the source.

The flow line was connected to four wells and Shell's Brutus platform, which floats in seas that are about a half mile deep in the Green Canyon area of the Gulf.

Shell said the leak was contained and that the wells on the site were shut in. It also said drilling at the site was stopped.

BSEE, the regulatory agency, said there have been no reports of injuries. In a statement, the agency said its investigators were at the Brutus platform to find out what caused the leak. The agency said it would review Shell's repair plans.

BSEE Director Brian Salerno said the agency would assess if improvements to "subsea infrastructure technology" should be made as a result of the incident.