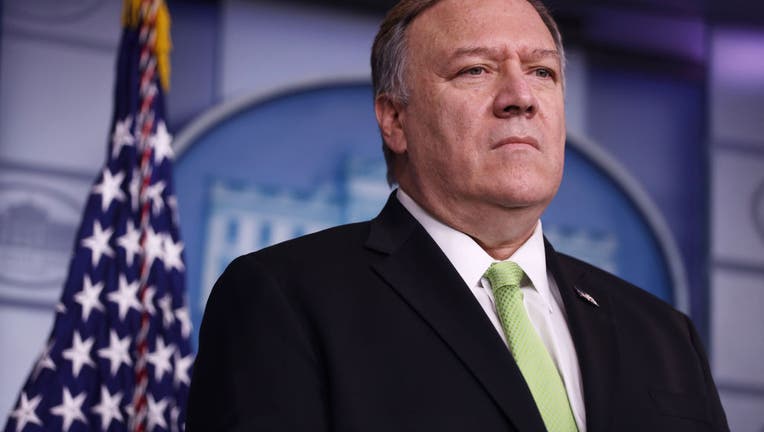 U.S. Secretary of State Mike Pompeo participates in a press briefing in the White House.

ATLANTA - Secretary of State Mike Pompeo plans to deliver a speech extolling the Trump administration’s foreign policy this week in Georgia, ahead of key Senate run-off elections in the state that will determine control of the upper chamber of Congress.

Pompeo is expected to address threats posed by China in an address to Georgia Tech on Wednesday, the university said.

The speech in Atlanta will come less than a month before the run-off elections for the Georgia Senate seats and follows weekend senatorial campaign appearances in the state by President Donald Trump and Vice President Mike Pence.

According to the university, Pompeo will discuss “the China challenge to U.S. national security and academic freedom.” The administration has rapidly and steadily ramped up sanctions against China over the past two years, limiting visas for Chinese researchers, scientists and academics, closing China’s consulate in Houston and imposing penalties on Chinese and Hong Kong officials.

Pompeo, who is widely seen as a contender for the 2024 GOP presidential nomination, has been heavily criticized for departing from the traditionally non-partisan role of the nation’s top diplomat by making appearances that have political overtones over the past several months. Most notably, those include a video address to the Republican National Convention in August that he taped during a trip to Israel.

Although secretaries of state often speak to domestic audiences, Pompeo’s RNC speech prompted calls from congressional Democrats for an investigation into whether it violated the Hatch Act that bars political appointees from overtly partisan activities. Pompeo has said a probe is underway, although State Department ethics officials have cleared him.

But, the RNC speech from the roof of a Jerusalem hotel is not the only Pompeo appearance that has raised eyebrows. Pompeo has spoken at The Villages, a heavily Republican retirement community in the battleground state of Florida, as well as at an Evangelical church in Texas and religious gatherings in Iowa and Florida, over the past 18 months.

Pompeo has yet to unambiguously recognize that Biden won the contest, although the State Department and other federal agencies are now cooperating with the Biden transition team. Pompeo, who made a point of discussing his outreach to his predecessors when he took over the job from fired Secretary of State Rex Tillerson, has yet to publicly acknowledge any contact with his designated successor, Antony Blinken.