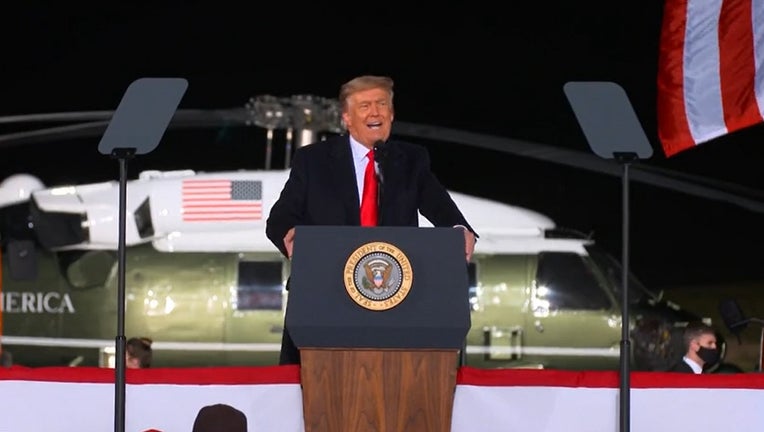 President Donald Trump holds a rally in Dalton a day before voters head to the polls in Georgia's twin Senate runoff races on Jan. 4, 2021. (FOX 5)

ATLANTA - An expert on Georgia’s racketeering law was sworn in Wednesday to help the prosecutor who’s investigating potential efforts by former President Donald Trump and others to influence last year’s general election.

Fulton County District Attorney Fani Willis has engaged John Floyd to serve as a special assistant district attorney to work with lawyers in her office on any cases involving allegations of racketeering, her spokesman Jeff DiSantis said. A Fulton County Superior Court judge swore him in Wednesday morning.

In letters sent to state officials last month asking them to preserve evidence for her investigation into potential attempts to influence last year’s election, Willis mentioned racketeering as one of the possible violations of Georgia law that she was examining.

Floyd previously helped Willis when she used the Georgia Racketeer Influenced and Corrupt Organizations, or RICO, law to prosecute nearly three dozen Atlanta public school educators accused in a cheating scandal. In April 2015, after a trial that spanned months, a jury convicted 11 former educators of racketeering for their role in a scheme to inflate students’ scores on standardized exams. Willis was a lead prosecutor in the case while working for her predecessor, former Fulton County District Attorney Paul Howard.

Floyd will remain employed by Atlanta law firm Bondurant Mixson & Elmore and will be available to help Willis as needed. He was not being retained for any particular case and could be consulted on possible racketeering violations in a variety of areas, including prosecutions of white collar crime, gangs and public corruption, DiSantis said.

Willis’s office has confirmed that the investigation into potential efforts to influence the election includes a Jan. 2 phone call in which Trump urged Georgia Secretary of State Brad Raffensperger to "find" enough votes to overturn Joe Biden’s win in the state. Willis has also said she has questions about a call U.S. Sen. Lindsey Graham made to Raffensperger, the sudden departure of a top federal prosecutor and statements made before Georgia legislative committees.

She wrote in the letters to state officials Feb. 10 that her office had opened a criminal investigation into "potential violations of Georgia law prohibiting the solicitation of election fraud, the making of false statements to state and local government bodies, conspiracy, racketeering, violation of oath of office and any involvement in violence or threats related to the election’s administration."

She wrote that her team has "no reason to believe that any Georgia official is a target of this investigation."

Also Wednesday, Common Cause, a government-accountability watchdog group, called on the U.S. Department of Justice to investigate whether Trump and others broke federal laws by communicating with officials in Georgia "in an effort to fraudulently and corruptly overturn 2020 presidential election results in Georgia," according to a letter sent to Acting U.S. Attorney Kurt Erskine in Atlanta and Merrick Garland, who was confirmed Wednesday by the Senate to serve as U.S. Attorney General.