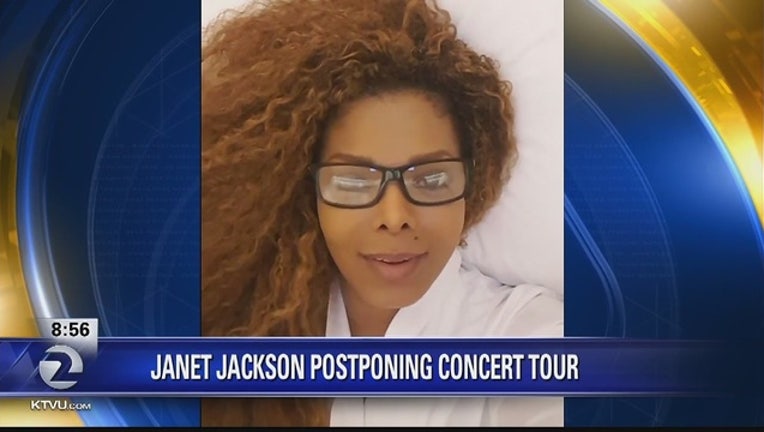 LOS ANGELES (KTVU) - According to a report by E.T., Janet Jackson is expecting her first child.

At this point, Jackson has not posted anything on social media to confirm or deny the repor.t

This comes after the 49-year-old singer delayed her tour. Jackson made the tour delay announcement last month saying she and her husband are planning their family and that she is under doctor's orders to rest.

On her Twitter account April 6th she said that there has been a "sudden change" to the second leg of her tour, which started in August. She had been scheduled to bring the North American leg of her tour to the Bay Area in May but those plans are now on hold.

Janet didn't say she was pregnant with her first child, only that she needed to rest up.

"My husband and I are planning our family, so I'm going to have to delay the tour. Please, if you can, try to understand that it's important that I do this now. I have to rest up; doctor's orders. But I have not forgotten about you."

Jackson married Wissam Al Mana in 2012. It is her third marriage. She married singer James DeBarge in 1984, when she was 18. That marriage lasted three months. In 1991, she married Rene Elizondo Jr. They separated in 1999.

In the one-minute, 46-second video clip, Jackson thanked her fans for their love and loyalty. She went on to thank her dancers, her band and her crew. She said she couldn't wait to get started again.

Jackson began her "Unbreakable" tour last August and it soon made the Top 20 global concert tour listing compiled by Pollstar. The singer's catalog of hits dates back to the mid-1980s, ranging from "What Have You Done for Me Lately" to "That's the Way Love Goes" and "All for You."