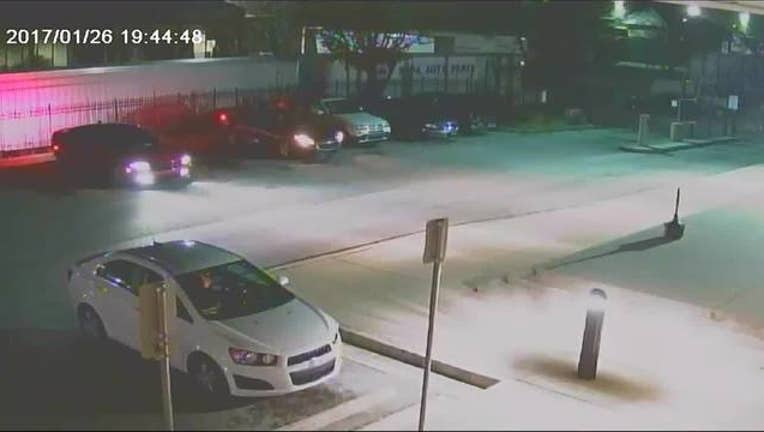 Authorities have said 24-year-old Deaundre Phillips was sitting in a car when two plainclothes officers approached after smelling marijuana apparently coming from the vehicle. Phillips got out to talk to officers and then lunged back in the car and drove away with one of the officers partially inside, they've said.

The officer who was in the car, identified as 11-year department veteran Yasin Abdulahad, shot Phillips once as the car drove off, authorities have said.

Fulton County District Attorney Paul Howard, whose office released the video, said in a statement that he is "well aware that the video footage depicts activities and events which might appear inconsistent with what has previously been described by the media."

Media reports were based on information provided by law enforcement.

Howard said his office plans an independent review of Phillips' death once it has received all of the investigative files and then will determine what the next step should be.

Chris Stewart, a lawyer for Phillips' family, has said Phillips had accompanied a friend picking up documents at the Atlanta Public Safety annex, which houses the central records department and other administrative offices.

He said the video contradicts the officer's story because it shows the officer was all the way inside the car, not being dragged. Stewart added that there couldn't have been a smell of marijuana coming from the car because there was no lit marijuana inside and no reason for the officer to approach.

Georgia Bureau of Investigation spokeswoman Nelly Miles on Friday confirmed that there was no lit marijuana found in the car.

The video is dark, and it's difficult to tell exactly what is happening.

The two officers - Abdulahad and Detective El Malik Roberson-EL - pull up in a red sports car and park near another car in the parking lot with its lights on. As the officers in street clothes get out of the car, they begin to walk toward the building, but the one who exited the passenger side, farthest from the other car, changes course and walks toward the car.

The two officers are seen interacting with the man in the parked car, presumably Phillips. They appear to speak with him and shine flashlights at him and the car. There appears to be a struggle, and one of the officers and the man who was in the parked car end up inside the vehicle. The car then pulls out and drives out of view of the camera with Phillips and one of the officers inside.

Stewart said he hopes the police department and district attorney will hold the officer accountable for what he said were clearly improper actions.

Atlanta police spokeswoman Officer Lisa Bender said in an emailed statement that the department appreciates the GBI's willingness to conduct an independent investigation.

"APD places enormous value on transparency and objectivity, and will accept the findings of the GBI's investigation," she said.