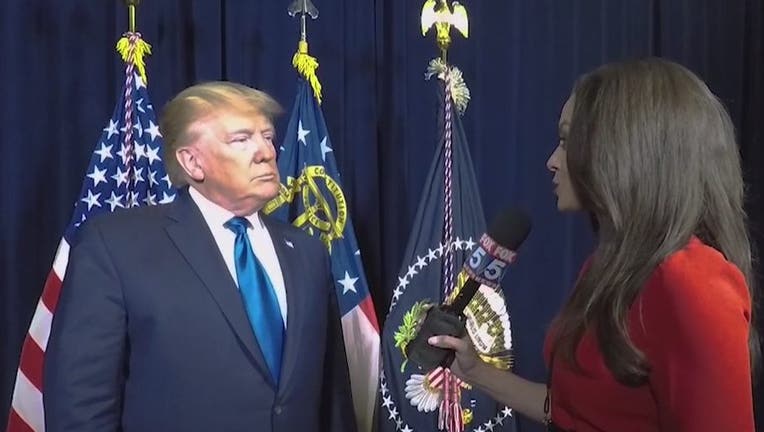 ATLANTA - Minutes before taking the podium at the Georgia World Congress Center in Downtown Atlanta on Friday to launch his black outreach effort for his 2020 re-election bid, President Donald Trump spoke exclusively to FOX 5 Atlanta.

In a very candid and confident interview with FOX 5’s Alyse Eady, the president faced questions about the impeachment inquiry, his message to Republicans to maintain party control in Georgia, the Georgia 5th Congressional District and his Twitter battle with Rep. John Lewis, how he plans to expand his base and win over more black voters, and about his attending the LSU-Alabama game this weekend. He answered all but one of her questions.

President Trump was in Atlanta to recruit more African American voters and in regards to that, the president said he’s already on the right track.

“And as you know, the polls have been very good for us now. and if you look at Black Voices for Trump today it's an overflow crowd,” the president said. “

“Well, we're doing well overall, African Americans are doing proportionally better and they've done better than they've ever done,” the president continued. “I said that was going to happen during the campaign and we've produced, so I think we're going to have tremendous African-American support.”

FOX 5's Alyse Eady was the only reporter to speak to President Trump during his Atlanta visit Friday.

Eady: “The impeachment inquiry, President Trump. How is this impacting your campaign for re-election?”

Trump: “We'll I'll tell you, my poll numbers are higher than they've been ever. The fundraising has been through the roof.

Eady: “I want to take you back to 2017, President Trump, you tweeted in regard to [Rep.] John Lewis (D-GA 5th District) and you were talking about the 5th Congressional District which is where we are right now. You mentioned that it was crime-infested. Do you still feel the same way?”

Trump: “Well, if it's crime-infested, it is. If you have crime, you have crime. We have to get it out. And we've been putting a lot of money into this area because, I mean frankly, Georgia’s coming a long way under this administration.

Eady: “Georgia is a really important state when it comes to the 2020 election with there being two Senate seats open as well. So, what's the message for Republicans to maintain control of Georgia?”

Trump: “Well, you got a great gentleman, [Sen.] David Purdue, and he's running, as you know, he's your senator, he fights so much, he loves his state, he loves your state, and David is running hard and I don't see how anybody can beat him frankly. he's been such a great senator.”

Trump: “And then as you know, [Gov.] Brian Kemp, who’s your governor, is going to be making a choice for [retiring Senator] Johnny Isakson, who has been so incredible for so long for the whole state, but they'll be making a choice very shortly and I’m sure he'll pick someone who is terrific.

Eady: “You're headed back this direction for the LSU-Alabama game. Your choice, your pick?”

Trump: “I'd rather not do that. But I'll tell you they are two fantastic teams, both undefeated. They're great teams and I think you're going to have an amazing game.”

Full interview with President Donald J. Trump during his visit to Atlanta.