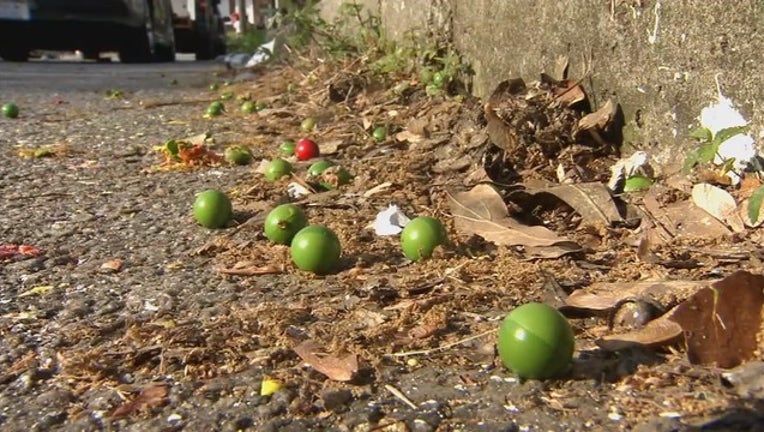 MILWAUKEE (AP) - Police across the country have responded to hundreds of paintball fights in recent weeks, a trend that authorities say began around the time an Atlanta rapper began posting YouTube videos encouraging people to trade real guns for paintball weapons.

But what started as an attempt to reduce gun violence has become anything but harmless. Police believe the phenomenon led to shooting deaths last month in Greensboro, North Carolina, and near Atlanta. The fast-moving paintballs have also injured bystanders caught in the crossfire and caused property damage in Milwaukee, Detroit and Atlanta.

When officers responded to an April 20 report of a shooting, they found 19-year-old Zyquarius Shalom Quadre Bradley with gunshot wounds and paintball damage around his car. Police also found paintball guns and a mask. The investigation continues. No one has been arrested, Davis said.

A few weeks earlier, on April 1, a 3-year-old boy was killed in Dekalb County, Georgia, when a teenager shot a real gun at his attackers during a paintball fight. One of the bullets struck the boy, police said.

Greensboro police have responded to nearly 40 reports of paintball fights since the start of April.

The numbers are larger in bigger cities. Milwaukee police received at least 65 calls about paintball battles over the past week and arrested one person. Hours after Milwaukee officers held a news conference Monday to alert the public, a 32-year-old bicyclist was shot in the eye with a paintball.

During the news conference, police emphasized that paintballs can do serious damage on the streets because they travel up to 300 feet per second. At venues where people pay to play, participants shield themselves with face masks and other protective gear, including padded vests.

Police have not said conclusively what sparked the trend. But in Atlanta, one of the cities where paintball fights were first reported, the calls began near the end of March - around the same time that rapper 21 Savage began posting YouTube videos with the message "Guns Down, Paintballs Up," according to Sgt. John Chafee. In the videos, the rapper and his friends record themselves having "paintball wars" around the city.

"We do not consider this a game and have been taking it very seriously," Chafee said in an email. "There are venues suitable for playing appropriate paintball games. We will not tolerate this activity in public areas, and we stand ready to make arrests when needed."

Atlanta police could not immediately say how many people they have arrested or how many calls they have received about paintball battles. Before last month, incidents involving paintball guns were so rare they were not specifically tracked, police said.

21 Savage, whose real name is Shayaa Bin Abraham-Joseph, did not respond to an email from The Associated Press.

In Detroit, police received 145 calls about paintball fights in just the past week. During one of those fights, a Detroit police captain's car was struck 11 times. One injured bystander is at risk of losing his eye, Detroit Police Chief James Craig said.

"It's under the guise of pick up paintball guns instead of real guns," Craig said. "That part is well-intentioned. But what's misguided is it's out in the public, and they're actually engaging in criminal activity when you talk about malicious destruction of property, when you talk about people who are being assaulted or injured."

Detroit police have arrested 10 people since last week and assembled a special unit to deal with the problem. Although there's been a slight decline in the number of calls in recent days, officers are still "taking a strong enforcement position," Craig said.

Paintball guns can also resemble real guns, making it difficult for police or someone else who is armed to tell the difference.

"So it really puts that person at tremendous risk," Craig said.