Officials have identified at least five deceased and two living victims from the building, but the investigation continues and additional victims could be found, State Attorney Katherine Fernandez Rundle said.

"Cyber grave robbers did move very quickly after the collapse to grab what they could from deceased victims while family and friends were in absolute emotional turmoil," Fernandez Rundle said. "Their motto could’ve been, ‘Your loss is our gain.'"

Florida law enforcement officials said they arrested several people suspected of stealing the identities of victims who died in the Surfside condominium building collapse in June, which killed 98 people.

She added, "These individuals appear to be very skilled identity thieves, they're professionals. Except for their names, almost nothing else about them seems to be true."

Authorities were first notified of possible fraudulent activity on July 9, when the sister of one of the deceased victims contacted Surfside police, officials said. The sister had noticed password changes to the victim's bank accounts and credit cards, as well as new addresses and contact information. 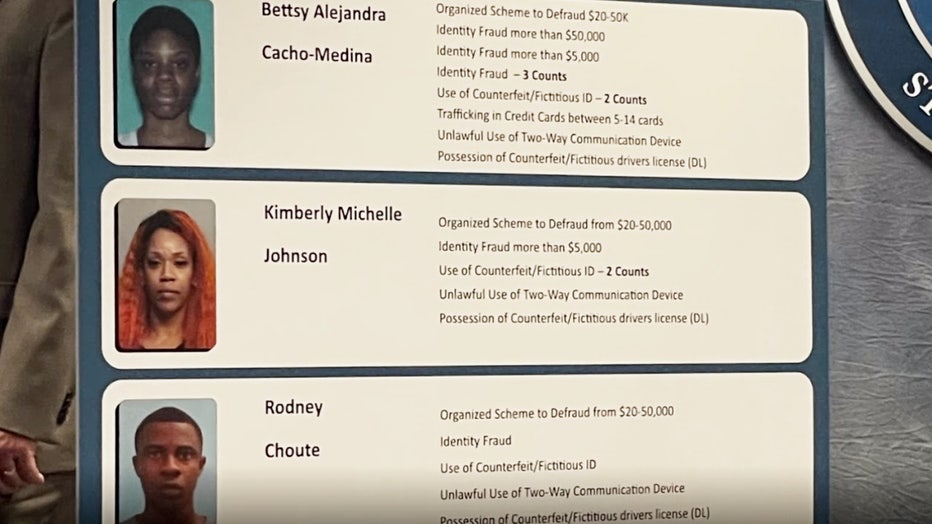 None of the new addresses were the residences of the identity thieves, officials said. The group was using a series of drop locations, investigators said, adding that is a common tactic used in fraud schemes. The group managed to steal about $45,000 through illegal cash transfers and by making expensive purchases with fraudulently obtained credit and debit cards. Investigators said security workers at banks and retailers managed to stop another $67,000 in fraudulent activity.

Sergio Lozano, who lost both of his parents in the collapse, told WSVN that someone hacked into their online accounts and started stealing from them.

"The day of the funeral they began the process, and after they’re dead and buried, they’re stealing from them?" It’s just wrong. Just wrong." 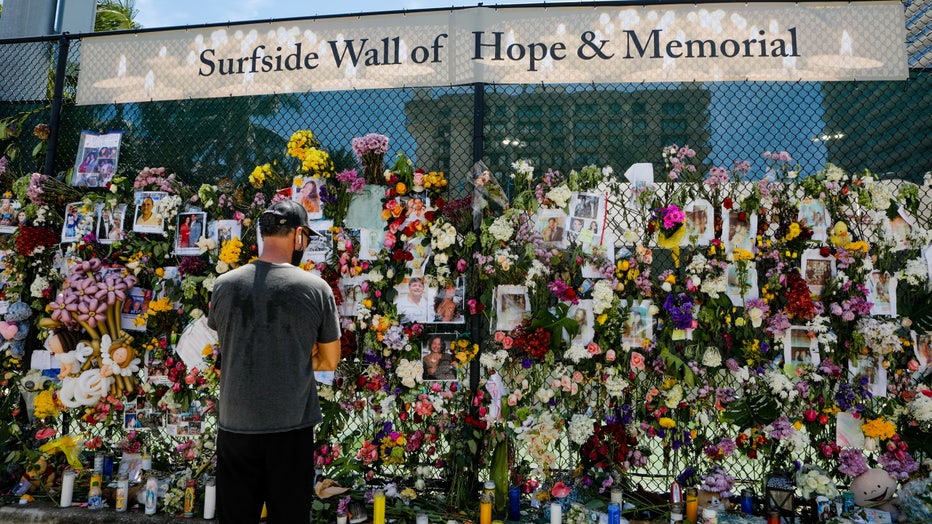 A man stands next to flowers and pictures of some of the missing from the partially collapsed 12-story Champlain Towers South condo building at the makeshift memorial for the victims of the building collapse in Surfside, Florida, U.S., on July 02, 20

Officials are still trying to determine what caused the 40-year-old building to collapse years after initial warnings about serious structural flaws. Debris has been cleared from the site and taken to a warehouse near the Miami International Airport for examination.

The city of Surfside released a report by an engineer from Nov. 15, 2018, which warned of "major structural damage." This includes cracks in the concrete, support columns, and "major design flaw" in the underground parking garage.

Despite the engineer’s warning of major structural problems, a town building official told board members the high-rise condominium was in "very good shape" almost three years before it collapsed. That was just over a month after engineering firm Morabito Consultants issued a report describing key flaws in the structure.

The remaining portion of the condo tower that collapsed in South Florida has been demolished. It took place on Fourth of July.

The Morabito report focused attention on the pool deck, which was found to have waterproofing underneath that had failed and had been laid flat instead of sloping to drain off water. This threatened not only the concrete slab under the pool but also other structural areas.

"Failure to replace the waterproofing in the near future will cause the extent of the concrete deterioration to expand exponentially," said the report, which also cited "abundant cracking" in concrete columns and beams.

Owners of the 136 units had been told earlier this year they would have to pay their share of a $15 million assessment — $9.1 million of which was major work — by July 1. That assessment ranged from about $80,000 for a one-bedroom unit to more than $330,000 for a penthouse.