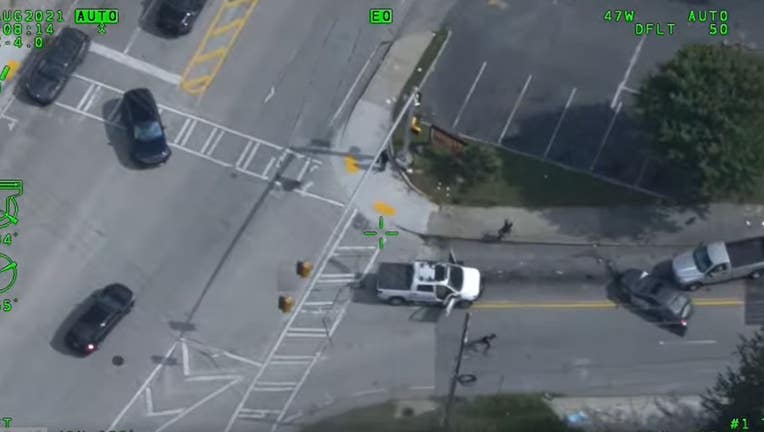 ATLANTA - Atlanta police have arrested two people they say were caught with stolen firearms and drugs while driving a stolen truck.

According to police, the incident began Monday when officers were advised that a white Toyota Tundra stolen out of Clayton County was in the area of the 200 block of Central Avenue SW.

When officers found the vehicle and attempted to pull it over, the driver sped off, fleeing onto the Downtown Connector.

During the chase, officers say the driver fled into Midtown and then kept driving onto the Buford Highway Connector.

Using the Atlanta Police's Air Unit Phoenix, officers were able to keep track of the stolen car and continue the chase. The car eventually crashed into a car on Piedmont Circle NE, which caused another accident with a Dodge Ram.

Police say the driver and passenger fled the scene on foot but were caught by officers and taken into custody without incident.

Inside the car, investigators say they found three firearms - two of which were determined to be stolen - and cocaine and marijuana.

Police charged the passenger, 21-year-old Jaborrie Darden, with trafficking cocaine, possession of a firearm during the commission of a felony, obstruction of police, and possession of less than 1 ounce of marijuana.

Both suspects are now in custody at the Fulton County Jail.