Photojournalist Alan Chin documented 9/11 in New York City and later traveled to Afghanistan in the early months of the war and later to Cuba to visit Guantanamo Bay prison.

NEW YORK - Twenty years after the terrorist attacks on Sept. 11, 2001, a photojournalist in New York City who documented history that day recalled the horror that unfolded before him and the impact of his images two decades later.

Alan Chin stayed up late on Sept. 10, 2001. The next morning, a phone call from his worried brother in Michigan woke him up at his apartment on Manhattan’s Lower East Side.

Chin had not yet heard what happened. He turned on the television, but couldn’t get any reception because the broadcast antenna was actually on top of the World Trade Center and no longer working.

"I could see just one channel after flipping through all the channels, and I could just see the live shot of both buildings burning. A horrifying sight, as it was," he told FOX’s LiveNOW.

He quickly grabbed his two cameras and hopped on his bike toward the towers.

"But even at that moment, I said to my then-partner, ‘I think I’m going to be away all day. Don’t worry if you don’t hear from me until late.’ Obviously, I knew this was horrific, but I could not imagine that the buildings would actually come down," Chin recalled.

The horror, as he detailed in a post on Business Insider, included seeing what he thought was debris falling from the North Tower, only to soon realize that it was actually a person falling hundreds of feet to their death.

Chin, who brought two cameras with him that day, had time to shoot one roll of film. He was about to reload that camera when the South Tower started exploding with a giant cloud of smoke and flames before coming down.

With a small group of firefighters, police and journalists, Chin ran into the basement of a building across the street from the World Trade Center — afraid that that building might fall on top of them.

"Amazingly enough, of course as we know, the buildings came straight down," Chin said.

RELATED: Never forget: A timeline of the events of September 11, 2001

For the next several hours, he describes being completely "on autopilot" — shooting images from America’s unfolding nightmare around what became known as Ground Zero.

"It was instinctive in a way. You go back just to your training and your experience (as a photojournalist)," he told LiveNOW.

His images show a man attempting to make a phone call inside a building on Vesey Street, completely covered in dust. Another shows people desperately fleeing the World Trade Center area on Broadway after the South Tower’s collapse.

In another image, firefighters sit together on a pile of debris with the look of shock, defeat and exhaustion on their faces.

Two decades later, Chin sometimes can’t believe he was there to witness the tragedy of 9/11 and was the person behind the camera.

"But then as you look and you recognize your own handwriting on the notes, and you can remember as you look at each picture what it felt like to push the button at that moment... it comes flooding back and you realize, ‘Of course, that's what I was doing at that moment,' especially with something as dramatic as what happened on September 11th," Chin explained.

He continued: "It’s very humbling because you realize time does go by and we’re older and the world has changed in all of these ways — a lot of that change being a direct result of 9/11."

Chin, who covered the Taliban’s previous rise to power in 1996 in Afghanistan, got an assignment to return there in November 2001 after the U.S. invaded the country. He also later traveled to Cuba to see the Guantánamo Bay prison.

Some of the younger U.S. population may not remember the details of where they were on Sept. 11 — or possibly were not even born yet. Chin says he was inspired to become a photojournalist by seeing images of history that occurred before he was alive, like the 1941 attack of Pearl Harbor.

"I always thought I want to be one of the people who makes these images. I want to have that front row on history," he said. "It’s an extraordinary privilege to do this." 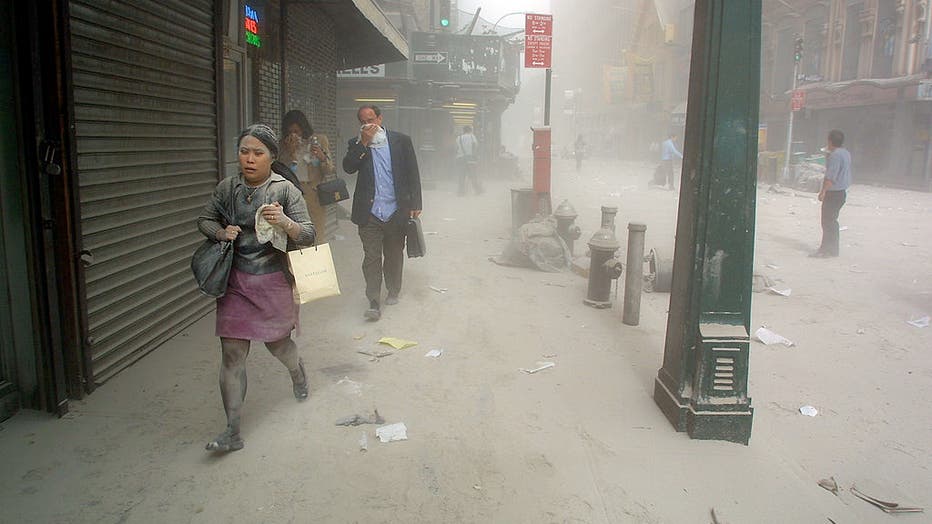 When people look at his or his colleagues’ images from New York City on Sept. 11, 2001, he hopes people see New Yorkers, the firefighters and other people so profoundly impacted that day.

"I want them to look at these images and look at the people in them," Chin said. "These are just regular people. They didn’t ask for this. It was just a beautiful September morning and it’s ordinary people that got caught up in extraordinary events."