Collins Hill High School parents want answers after a racist photo made its way into the final print of the yearbook.

The faces of those in the original photo have been cropped out, but the image appears to show Dr. King's arm around a Collins Hill High School student who can be seen holding a sign that reads "official n-word pass." 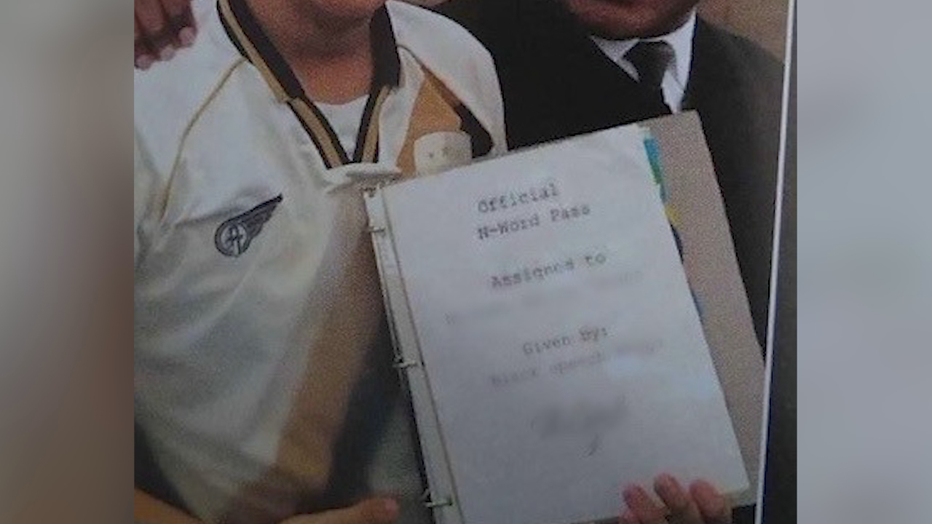 A cropped photo of an offensive picture that made its way into a high school yearbook. (Gwinnett County Schools)

After making the disturbing discovery, the principal sent a letter to parents and staff addressing how this photo made it into the yearbook. Principal Kerensa Wing wrote:

“I am reaching out to make you aware of a disturbing issue involving our school yearbook. The yearbooks arrived this week and we began distributing them when it was brought to our attention that it includes an inappropriate and racist photograph. This is unacceptable and we are currently investigating to determine who submitted this photo and how our processes did not address this before it went to print. Once this investigation is completed we will take appropriate action with those involved. In our initial investigation, it appears that some of the pages planned for the yearbook were not finished prior to our students moving to digital learning. As these photos were not available, the yearbook company replaced those pages with senior selfies that had been submitted. Unfortunately, the picture was not caught in the final proof before the yearbook went to press. That said, this photo was submitted by our yearbook staff and we are meeting with those involved to determine how that occurred.

“In the meantime, I want to make you aware of the steps we are taking to remove this offensive picture from our yearbook. We are working with the yearbook company to print a sticker of a replacement photo that will be mailed to all who purchased a yearbook. As we have not finished distributing the yearbooks, this photo has been altered to block the offensive message from all yearbooks still in our possession. We also will be reviewing all of our yearbook processes— from the submission of photos to final proofing—to ensure this does not occur again.

“I know offensive words and sentiments like the ones included in this photo are hurtful and you have my full apology this has happened. I am disappointed in the students involved, as this is not who we are at Collins Hill High School and does not reflect our values and beliefs.”

A Gwinnett County high school principal is investigating after a racist photo made it into the yearbook.

The principal says the picture was not caught in the final proof before the yearbook went to press but once their investigation is completed then appropriate action will be taken. A sticker is being sent to students to allow them to cover the photo and all yearbooks not yet distributed will be altered.